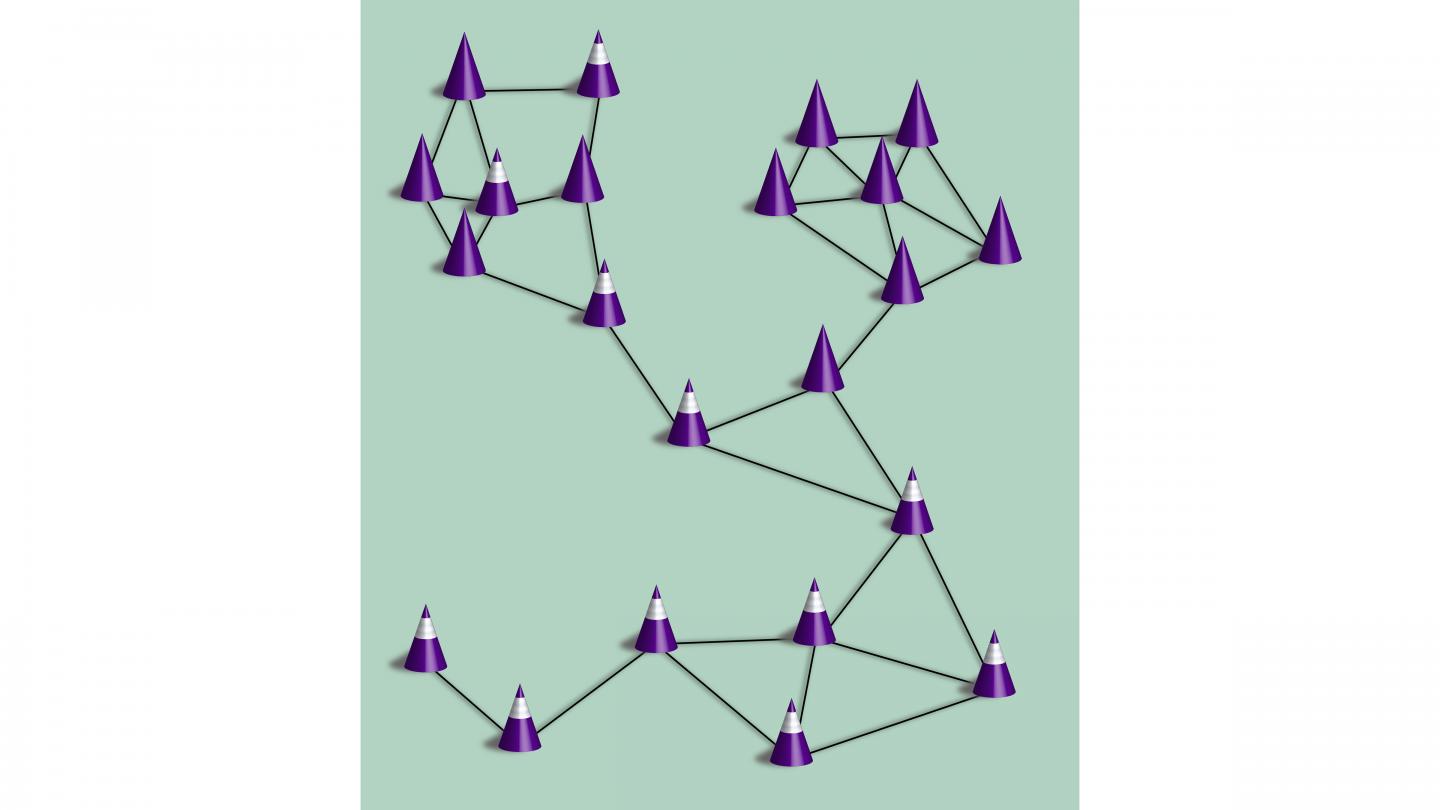 IMAGE: Illustration of a network of contacts to show the spreading of COVID-19 in a population where a fraction of the individuals (cones) wear masks and practice social distancing (cones with...

WASHINGTON, April 13, 2021 -- Studies show wearing masks and social distancing can contain the spread of the COVID-19 virus, but their combined effectiveness is not precisely known.

In Chaos, by AIP Publishing, researchers at New York University and Politecnico di Torino in Italy developed a network model to study the effects of these two measures on the spread of airborne diseases like COVID-19. The model shows viral outbreaks can be prevented if at least 60% of a population complies with both measures.

"Neither social distancing nor mask wearing alone are likely sufficient to halt the spread of COVID-19, unless almost the entire population adheres to the single measure," author Maurizio Porfiri said. "But if a significant fraction of the population adheres to both measures, viral spreading can be prevented without mass vaccination."

A network model encompasses nodes, or data points, and edges, or links between nodes. Such models are used in applications ranging from marketing to tracking bird migration. In the researchers' model, based on a susceptible, exposed, infected, or removed (recovered or has died) framework, each node represents a person's health status. The edges represent potential contacts between pairs of individuals.

The model accounts for activity variability, meaning a few highly active nodes are responsible for much of the network's contacts. This mirrors the validated assumption that most people have few interactions and only a few interact with many others. Scenarios involving social distancing without mask wearing and vice versa were also tested by setting up the measures as separate variables.

The model drew on cellphone mobility data and Facebook surveys obtained from the Institute for Health Metrics and Evaluation at the University of Washington. The data showed people who wear masks are also those who tend to reduce their mobility. Based on this premise, nodes were split into individuals who regularly wear masks and socially distance and those whose behavior remains largely unchanged by an epidemic or pandemic.

Using data collected by The New York Times to gauge the model's effectiveness, the researchers analyzed the cumulative cases per capita in all 50 states and the District of Columbia between July 14, 2020, when the Centers for Disease Control and Prevention officially recommended mask wearing, through Dec. 10.

In addition to showing the effects of combining mask wearing and social distancing, the model shows the critical need for widespread adherence to public health measures.

"U.S. states suffering the most from the largest number of infections last fall were also those where people complied less with public health guidelines, thereby falling well above the epidemic threshold predicted by our model," Porfiri said.