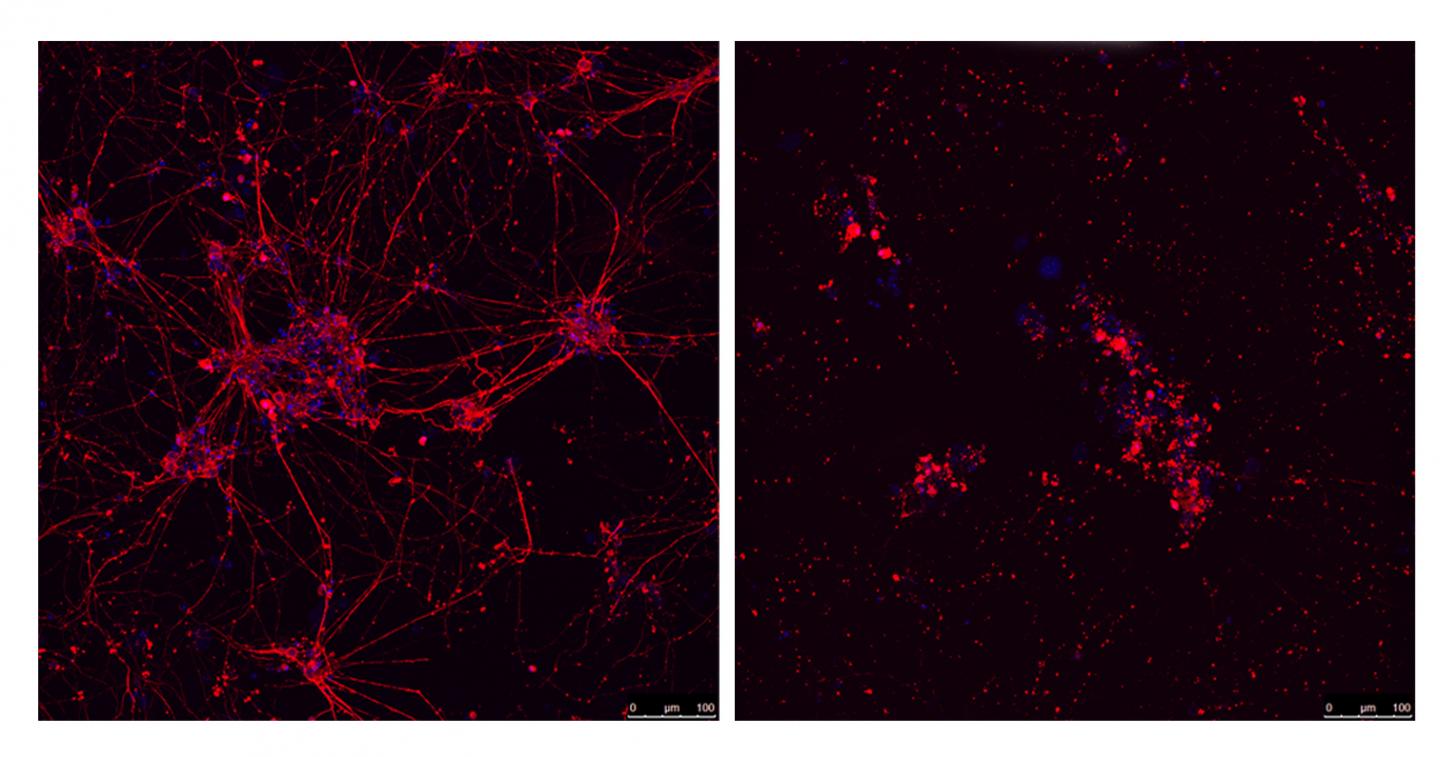 IMAGE: Mouse motor neurons, generated from mouse embryonic stem cells exposed (right) or not (left) to ALS-associated peptides (right). As observed in patients, these peptides are toxic and cause neuronal death....

In Amyotrophic Lateral Sclerosis (ALS), the progressive death of neurons that control body movement leads to paralysis of muscles in the limbs and gradually of the whole body, which ultimately makes it impossible to breathe. ALS is currently untreatable, and its cause is unknown.

It is known, however, that in 10% of affected individuals there is a strong genetic component, which causes the disease to occur in several members of a single family. In about half of these cases of familial ALS, the origin lies in a gene called C9ORF72. But why do mutations in this gene kill motor neurons?

The answer may have been found by the Genomic Instability Group headed by Óscar Fernández-Capetillo at the Spanish National Cancer Research Centre (CNIO), who discovered a mechanism that explains the toxicity derived from mutations in C9ORF72. The novel mechanism links these mutations to a general problem that blocks all nucleic acids, DNA and RNA, and thus disrupts a multitude of processes that are fundamental to the functioning of cells.

The paper is published this week in The EMBO Journal, with CNIO researchers Vanesa Lafarga and Oleksandra Sirozh as first authors.

Why neurons die in ALS patients

ALS researchers had already observed that many basic cellular processes that use nucleic acids do indeed fail in the neurons of affected patients. Now the CNIO group provides a model that connects them all and thereby explains these widespread problems.

"I think we have a pretty satisfactory model that helps us understand what is going on in the motor neurons of ALS patients, what is killing them," says Fernández-Capetillo. "We are excited, as the key to curing any disease is to understand first what is not working. Only then can you start looking for a treatment."

Although the newly identified toxic mechanism is associated with mutations in a specific gene, C9ORF72, the CNIO group believes it is likely that other ALS-related mutations are acting in a similar way, i.e., by blocking the DNA and RNA of motor neurons.

Mutations in the C9ORF72 gene are toxic, the CNIO researchers reveal, because they induce the cell to produce small proteins or peptides that are very rich in arginine, an amino acid that, due to its positive charge and chemical nature, binds very avidly to nucleic acids, DNA and RNA.

The CNIO study indicates that, by binding to nucleic acids with such high affinity, these arginine-rich proteins displace all cellular proteins that interact with DNA and RNA in a widespread manner, thus blocking any cellular reaction that involves DNA or RNA. And as a result, with its nucleic acids effectively blocked, the cell dies.

DNA contains the instructions for the cell to make the proteins it needs for proper function. Hundreds of proteins need to anchor themselves to the DNA and RNA to read their instructions and eventually make new components for the cell. But "the presence of arginine-rich peptides hampers any reaction involving nucleic acids," the authors of the new study add.

As Fernández-Capetillo puts it: "What we have seen is that arginine-containing peptides are like a kind of tar that sticks to nucleic acids and decorates them, and in doing so they displace the proteins that are normally bound to the nucleic acids so that nothing that involves DNA or RNA works."

"In all these decades of ALS research, neuroscience researchers have been publishing all sorts of problems in reactions using nucleic acids: translation, replication, etc. Nothing works! We think our model gives a simple answer to all these observations," continues Fernández-Capetillo.

Fernández-Capetillo's research usually focuses on cancer, but he strives to "keep his eyes open" to any problem to which his knowledge can be applied. In 2014, he started working on ALS, convinced that a technique recently established in his group could help them understand the toxicity of mutations in the C9ORF72 gene. And it was a flash of insight, an idea that came up after having coffee at the CNIO with Nobel laureate Jack Szostak, which put him on the trail of arginine.

"Szostak investigates the chemistry of the origin of life, and he told me that to stop reactions involving nucleic acids what they used in their experiments was precisely synthetic peptides with lots of arginines because of their high affinity for nucleic acids," says Fernández-Capetillo. "So I thought, what if this is what is going on, what if the arginine-rich proteins in ALS patients are blocking DNA and RNA in a generalised way?"

The protein that compacts sperm nucleus does the same thing

This initial hypothesis was supported when the group decided to test whether similar problems were also seen when cells would be exposed to a natural protein that has a lot of arginines. There is such a protein, but it is expressed only transiently during the development of sperm cells: protamine.

Consistent with the model now published in The EMBO Journal, the biological function of protamine is to displace histones from the DNA; histones are proteins that facilitate DNA compaction. "By exchanging histones for protamine, which is smaller, sperm DNA can become more compact," explains Fernández-Capetillo.

However, protamine is toxic to any cell that is not a sperm cell. "We think that what happens in ALS patients is equivalent to what would happen if their motor neurons accidentally started to produce protamine."

Indeed, the paper in The EMBO Journal shows that the cellular effects of protamine are identical to those of the arginine-rich peptides found in ALS patients.

How to overcome toxicity

Now that we understand why arginine-rich peptides are toxic, the next step is to find ways to overcome this toxicity. And research along these lines has already begun in the group. As has the work to create animal models in which the problem - the production of toxic peptides - is reproduced, to provide a platform for testing potential therapies.

Learning how to alleviate the toxicity of these peptides may also be useful in addressing non-C9ORF72-associated ALS, that is, the disease as a whole. The authors of the paper believe that the widespread mechanism of nucleic acid blocking is probably what happens in ALS in general.

As Vanesa Lafarga explains, "the vast majority of mutations found in ALS patients are in proteins that bind RNA, and what these mutations generally do is prevent the binding of these proteins to RNA. Moreover, the cells of these patients also have very general problems with their nucleic acids. That is why we believe that, although mutations in C9ORF72 only affect a fraction of ALS patients, the mechanism underlying the toxicity of neurons may not be fundamentally different from what happens in the rest of ALS patients. Trying to show whether this is the case is something we are working on now."