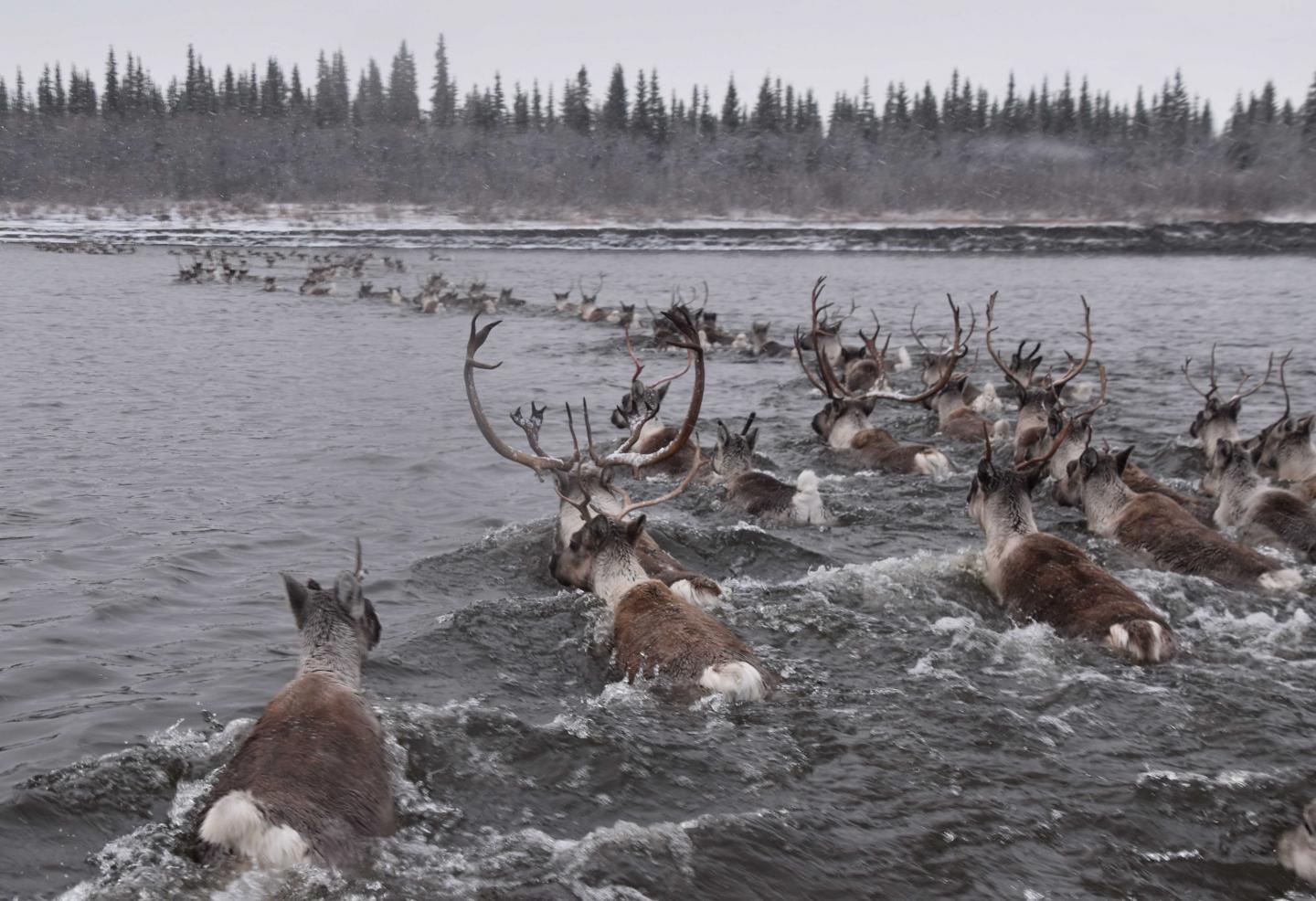 IMAGE: Caribou weakened by harassing insects in the summer take longer to migrate to calving grounds the following spring. This means calves have less time to fatten up before winter. As...

Caribou, the North American cousin of reindeer, migrate farther than any terrestrial animal. They can cover thousands of miles as they move between winter feeding grounds and summer calving grounds. But many caribou herds are in decline as the warming climate changes much of the landscape they depend on. Inedible shrubs are rapidly encroaching on the tundra, and more frequent forest fires and disease are destroying the trees that provide caribou with lichen for food. The role of climate on their migration patterns has never been well understood, but knowing what drives caribou movements is crucial to predicting the future for the iconic species that plays a key roll the ecological and economic stability of the Arctic region.

A new study led by a University of Maryland biologist discovered two unexpected drivers for migration timing that dispute long-held assumptions and provide insight into potential future effects of climate change on caribou. First, the study found that caribou herds all across North America are triggered to start spring migration at roughly the same time by large-scale, ocean-driven climate cycles. Second, despite a synchronized start, arrival at their respective calving grounds depends on the previous summer's weather conditions. Warm, windless summers that favored insect pests lead to poorer maternal health and delayed arrivals at the calving grounds the following spring.

The study, which accounted for approximately 80% of all North American migratory caribou, is the largest caribou migration study to date. It was published in the December 12, 2019 issue of the journal Ecosphere.

"This was completely unexpected," said Eliezer Gurarie, an associate research scientist in UMD's Department of Biology and lead author of the study. "There was no reason to think that herds that calve near the Hudson Bay in the East would begin migration at the same time as the herds along coastal Western Alaska, or that summer conditions would play an important role in the following spring migration. Prior to this, it had been assumed that migration timing depends on some combination of snowmelt and availability of useful vegetation at the endpoint of the migration. Neither of those held up."

The findings could point to difficult times for caribou in the future if Arctic summers continue to warm as predicted.

"The summers are definitely getting warmer and more insect friendly," Gurarie said. "That is going to have consequences for these iconic animals down the road."

To understand what drives caribou migration, Gurarie analyzed tracking data from 1,048 individual caribou from 1995 to 2017. The data represent seven major herds that account for 80% of all North American caribou. The data was collected by the study's coauthors from the National Park Service, Alaska Department of Fish and Game, Yukon Government and Government of Northwest Territories. Gurarie correlated the tracking data to global climate indices, local weather conditions, snowmelt timing and vegetation.

The results revealed a clear pattern of synchronized departure. Later migration starts were associated with positive North Atlantic Oscillations in spring and summer, which tend to create cooler, dryer and less windy conditions. Earlier migration starts corresponded with two cycles: a positive Pacific Decadal Oscillation in the spring and previous summer, which tends to bring more snow and wind to the North; and a positive Arctic Oscillation, which strengthens the polar circulation and forces cold air and storms to remain farther north.

The relationship between these oscillations and weather on the ground is complex, but the study draws links that explain how regionwide seasonal conditions might influence migration. For example, the scientists found that across the Arctic, warm temperatures after a snowy winter delayed the start of migration, and Gurarie suggested this is likely because snowmelt softened the ground and made travel difficult.

"The whole departure story is linked to conditions that are most suitable for movement," Gurarie said. "It's less about whether or not there is snow on the ground and more about the conditions of the snow: Is it slushy and soupy and hard to travel through, or is it hardpacked and easier to walk on?"

Regardless of travel conditions at the start of migration, the study revealed that caribou arrive at their calving grounds when they are ready to give birth. (If they start migration early in the season, they tend not to rush. If they start late, they move nearly continuously to get to the calving grounds.) But caribou have variable gestation periods, so not all herds were ready to give birth at the same time, which meant some herds arrived at their respective calving grounds later than others. When the researchers compared arrival times with climate and weather data, they consistently found that caribou herds arrived at the calving grounds earlier when they experienced cool, windy conditions the previous summer.

"This connection to the previous summer's weather, particularly temperature and wind, kept coming up," Gurarie said. "When we looked closer at the biology and ecology of these animals, it became clear that this was tied to insect harassment and the physical condition of the caribou."

Insects are relentless pests during summer in the Arctic. Caribou spend a great deal of energy searching for relief from the mosquitos, botflies and warble flies that plague them. To avoid the insects, Caribou move en masse to higher ground or closer to the coast, or they wander in search of snow patches where there are fewer insects. All of that avoidance means much less eating.

During cooler, windier summers, caribou remain healthier because they spend less time avoiding insects and more time eating. Healthier caribou cows have more nutrient stores and shorter pregnancies, whereas caribou weakened by a tough summer of insect harassment have longer pregnancies and arrive at the calving grounds later. Unfortunately, herds that arrive late continue to be at a disadvantage, because their calves have less time on the summer feeding range to fatten up before migrating back to the winter range in the fall.

"Ultimately, we analyzed satellite-tracked movement data and remotely sensed climate and weather data," Gurarie said. "Using these large-scale observational data, we pieced together a story about individual physical condition, gestation times and reproduction calving, which is really a story about behavior and physiology on a very large scale. In making these links, we ended up leaning on decades-old studies of caribou--papers from the '50s, '60s and '70s. We looked, for example, at relationships between diet and calving timing, at insects and feeding behavior, and at snow quality and movement."

Gurarie's excitement over the power of the data to help reveal the story of caribou migration is tempered by a looming question about what could happen to caribou as the climate continues to warm. The team's next steps are to analyze data on caribou birth and death rates to gain a clearer picture of how migration timing and environmental conditions affect caribou populations.

"Researchers have been studying caribou movement and ecology for decades, but the data are fragmentary," said William Fagan, professor and chair of the UMD Department of Biology and a co-author of the study. "This study shows that by synthesizing these data--from climate data, and remote tracking data to historical studies and biological data collected in the field by the various agencies that manage caribou across the continent--there are great opportunities to gain a more integrated portrait of this economically, culturally and ecologically important species."