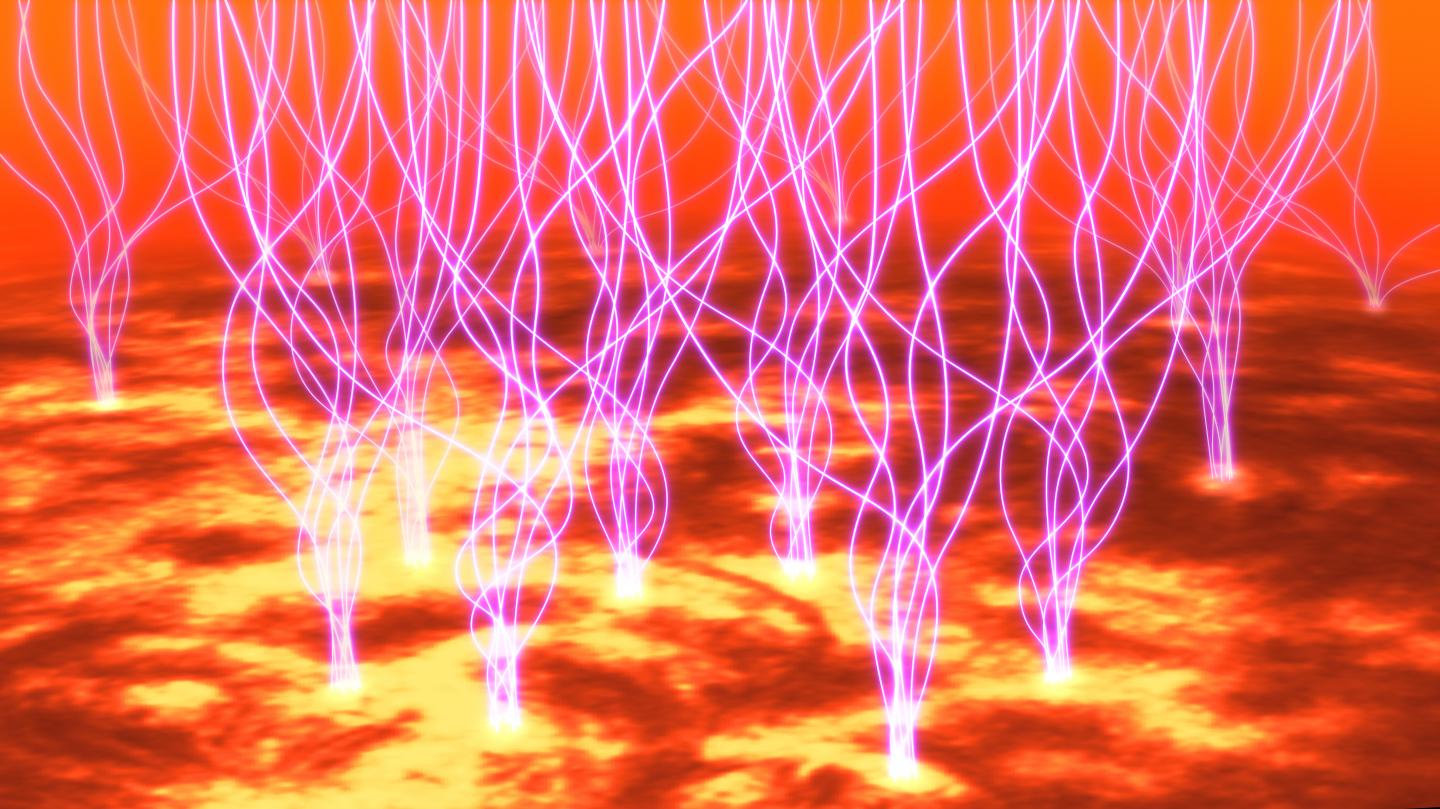 IMAGE: Artistic visualization of the Sun's magnetic field in the active region observed by CLASP2

Every day space telescopes provide spectacular images of the solar activity. However, their instruments are blind to its main driver: the magnetic field in the outer layers of the solar atmosphere, where the explosive events that occasionally affect the Earth occur. The extraordinary observations of the polarization of the Sun's ultraviolet light achieved by the CLASP2 mission have made it possible to map the magnetic field throughout the entire solar atmosphere, from the photosphere until the base of the extremely hot corona. This investigation, published today in the journal Science Advances, has been carried out by the international team responsible for this suborbital experiment, which includes several scientists of the POLMAG group of the Instituto de Astrofísica de Canarias (IAC).

The chromosphere is a very important region of the solar atmosphere spanning a few thousand kilometers between the relatively thin and cool photosphere (with temperatures of a few thousand degrees) and the hot and extended corona (with temperatures above a million degrees). Although the temperature of the chromosphere is about one hundred times lower than that of the corona, the chromosphere has a far higher density, and thus much more energy is required to sustain it. Moreover, the mechanical energy necessary to heat the corona needs to traverse the chromosphere, making it a crucial interface region for the solution of many of the key problems in solar and stellar physics. One of the current scientific challenges is to understand the origin of the violent activity of the solar atmosphere, which on some occasions perturb the Earth's magnetosphere with serious consequences for our present technological world.

"It is impossible to understand the solar atmosphere if we cannot determine the magnetic fields of the chromosphere, especially in its outer layers where the plasma temperature is of the order of ten thousand degrees and the magnetic forces dominate the structure and dynamics of the plasma", says Javier Trujillo Bueno, CSIC Professor at the IAC and lead scientist of the POLMAG group of the IAC (see http://research.iac.es/proyecto/polmag/). The theoretical investigations carried out by this group, funded by an Advanced Grant of the European Research Council, indicated that this goal could be reached by observing the polarization that various physical mechanisms produce in the radiation emitted by neutral hydrogen and ionized magnesium atoms in the solar chromosphere.

Because the Earth's atmosphere strongly absorbs the solar ultraviolet radiation, one must go to observe it at altitudes above 100 kilometers. An international consortium was established with this goal, led by the NASA Marshall Space Flight Center (NASA/MSFC), the National Astronomical Observatory of Japan (NAOJ), the French Institute of Space Astrophysics (IAS) and the Spanish Instituto de Astrofísica de Canarias (IAC). This international team designed a series of space experiments that were selected through competitive calls within the Sounding Rocket Program of NASA. These space experiments are known as CLASP, the "Chromospheric Lyman-Alpha Spectro-Polarimeter" (CLASP1, launched on the 3rd of September 2015) and the "Chromospheric LAyer Spectro-Polarimeter" (CLASP2, launched on the 11th of April 2019). Both experiments were a great success (see the POLMAG project webpage http://research.iac.es/proyecto/polmag/pages/news-and-press-releases/clasp.php), which NASA has acknowledged by granting the "Group Achievement Honor Award" to the international team.

The research paper recently published in the prestigious journal "Science Advances" is based on a small part of the unprecedented data acquired by CLASP2. The team analyzed the intensity and the circular polarization of the ultraviolet radiation emitted by an active region of the solar atmosphere in the spectral range containing the h & k lines of Mg II (ionized magnesium) around 2800 Å (see figure 1). Within this spectral region there are also two spectral lines produced by Mn I (neutral manganese) atoms.

While CLASP2 was carrying out its observations, the Hinode space telescope was simultaneously pointing at the same active region on the solar disk. "This made it possible to obtain information about the magnetic field in the photosphere through the polarization observed in neutral iron (Fe I) spectral lines of the visible range of the spectrum", notes Andrés Asensio Ramos, another IAC researcher who participated in the project. The team also made simultaneous observations with the IRIS space telescope, measuring the intensity of the ultraviolet radiation with higher spatial resolution (IRIS was not designed to measure polarization).

The team's investigation, led by Dr. Ryohko Ishikawa (NAOJ) and Dr. Javier Trujillo Bueno (IAC), allowed to map for the first time the magnetic field in the active region observed by CLASP2 throughout its entire atmosphere, from the photosphere to the base of the corona (see figure 2). "This mapping of the magnetic field at various heights in the solar atmosphere is of great scientific interest, as it will help us decipher the magnetic coupling between the different regions of the solar atmosphere", comments Ernest Alsina Ballester, a researcher of the international team who just joined the IAC after his first postdoc in Switzerland.

The achieved results confirm and prove that, in these regions of the solar atmosphere, the lines of force of the magnetic field expand and fill the whole chromosphere before reaching the base of the corona. Another important result of this investigation is that the magnetic field strength in the outer layers of the chromosphere is strongly correlated with the radiation intensity at the center of the magnesium lines and with the electron pressure in the same layers, revealing the magnetic origin of the heating in the outer regions of the solar atmosphere.

The CLASP1 and CLASP2 space experiments represent a milestone in astrophysics, providing the first observations of the relatively weak polarization signals produced by various physical mechanisms in spectral lines of the solar ultraviolet spectrum. Such observations have spectacularly confirmed previous theoretical predictions, thus validating the quantum theory of the generation and transfer of polarized radiation that these scientists apply in their investigations about the magnetic field in the solar chromosphere.

The international team has just received the good news that NASA has selected their recent proposal to carry out a new space experiment next year, which will allow them to map the magnetic field over larger regions of the solar disk. "Of course, systematic observations of the intensity and polarization of the solar ultraviolet radiation will require a space telescope equipped with instruments like the ones on CLASP, because the few minutes of observation time allowed by a suborbital flight experiment are not sufficient", clarifies Javier Trujillo Bueno. The team is convinced that, thanks to what CLASP1 and CLASP2 have achieved, such space telescopes will soon become a reality and the physical interpretation of their spectropolarimetric observations will allow for a better understanding of the magnetic activity in the outer layers of the Sun and other stars.