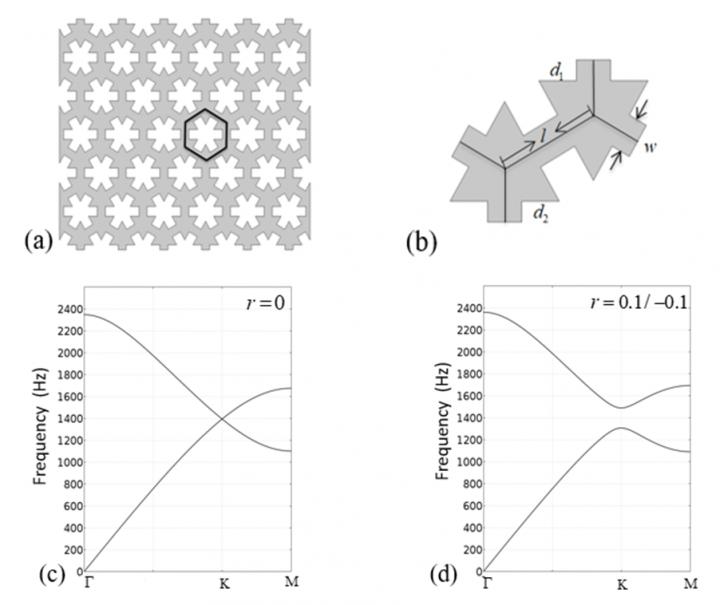 In the paper, a C6v-symmetric structure is thoroughly studied in which the valley Hall effect plays an important role when the Dirac cone at the corner point of the Brillouin region is opened, accompanied by a new band gap, by changing the symmetry of the structure from C6v into C3v. Further, the researchers analyze the acoustic wave propagation in two types of topological states in the range of this new band gap. The first type appears at the top or bottom boundary of the single structure, whereas the second type is confined to the interface between two structures exhibiting different topological properties.

As depicted in Figures 1(a) and 1(b), the sonic crystal is composed of a triangular-lattice array. The side lengths of two adjacent regular triangles connected by rectangular waveguides are d1 and d2, respectively and d1/d2=(1-r)/(1+r). Figures 1(c) and 1(d) provide the dispersion relations of the sonic crystal along the typical boundaries of the Brillouin zone when r=0 and r=0.1/-0.1, respectively. In Figure 1(c), double degeneracy occurs, which is located at the K-point due to the C6v symmetry of the structure. In constrast to Figure 1(c), a band gap appears in Figure 1(d) by breaking the C6v symmetry into the C3v symmetry. Therefore, an acoustic topological insulator based on the mechanism of valley Hall effect is constructed. Both the two types of topological states in the range of this new band gap can propagate in both the directions (i.e., dual-channel propagation).

By combining the edge state and the interface state together, the acoustic wave propagation path in the band gap can be tailored in more flexible, diverse, and intriguing ways. It provides a new idea for the design of tunable acoustic devices.