Chemotherapy can induce mutations that lead to pediatric leukemia relapse 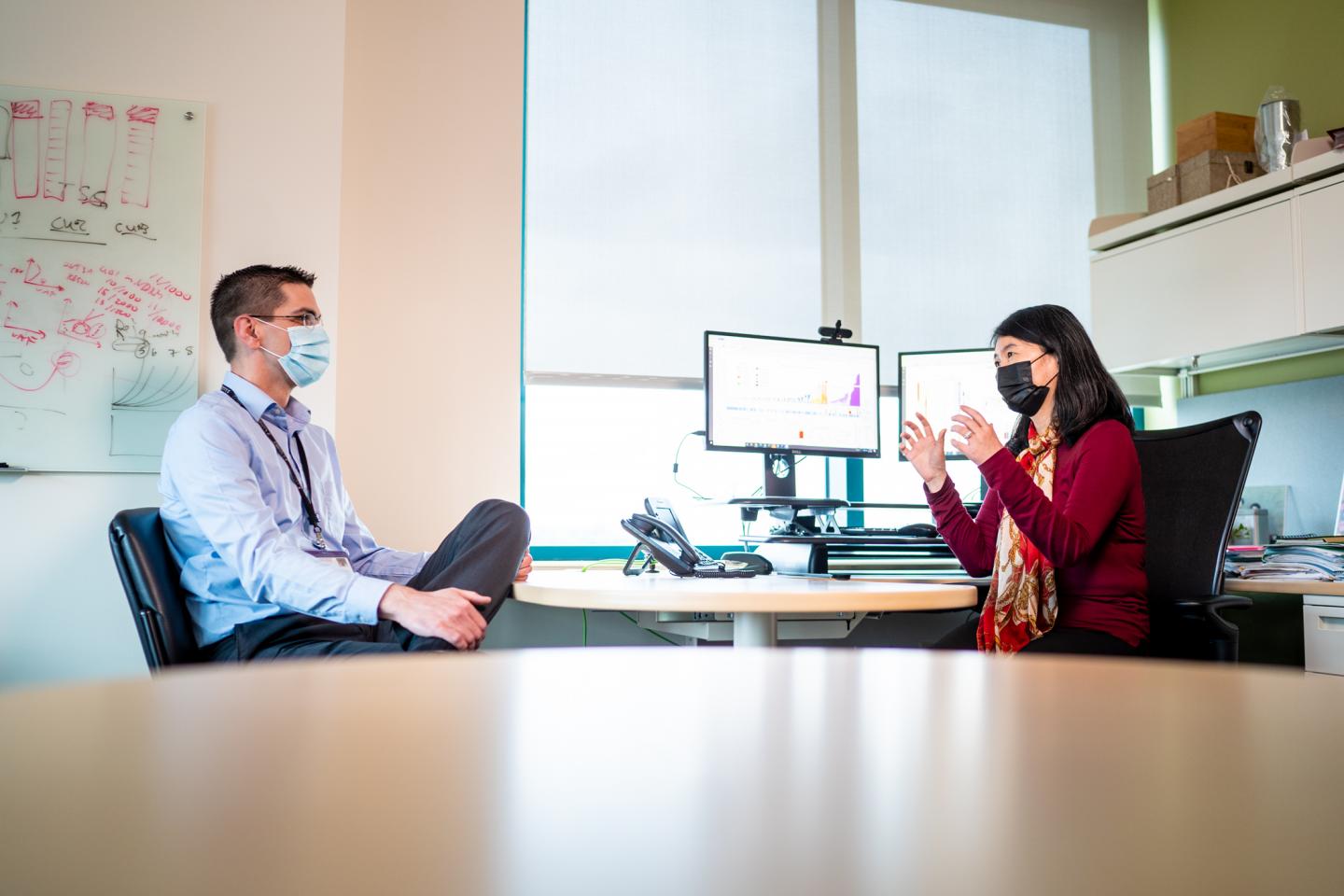 image: From left: Samuel Brady, Ph.D., and Jinghui Zhang, Ph.D., chair, both of Computational Biology, contributed to research that provides the first direct genomic and experimental evidence in pediatric cancer that drug-resistant mutations can be induced by chemotherapy.

Chemotherapy has helped make acute lymphoblastic leukemia (ALL) one of the most survivable childhood cancers. Now, researchers working in the U.S., Germany and China have shown how chemotherapy drugs called thiopurines can lead to mutations that set patients up for relapse. The work appears today in the journal Nature Cancer.

The research provides the first direct genomic and experimental evidence in pediatric cancer that drug-resistant mutations can be induced by chemotherapy and are not always present at diagnosis.

"The findings offer a paradigm shift in understanding how drug resistance develops," said Jinghui Zhang, Ph.D., Department of Computational Biology chair at St. Jude Children's Research Hospital. "The results also suggest possible treatment strategies for ALL patients who relapse, including screening to identify those who should avoid additional thiopurine treatment."

Zhang is co-corresponding author of the study with Bin-Bing Zhou, Ph.D., of Shanghai Children's Medical Center; and Renate Kirschner-Schwabe, M.D., of Charite-Universitaetsmedizin Berlin.

The roots of relapse

While 94% of St. Jude patients with ALL become five-year survivors, relapse remains the leading cause of death worldwide for children and adolescents with ALL.

Brady and his colleagues linked increased thiopurine-induced mutations to genes such as MSH2 that become mutated in leukemia. The mutations inactivated a DNA repair process called mismatch repair and rendered ALL resistant to thiopurines. The combination fueled a 10-fold increase in ALL mutations, including an alteration in the tumor suppressor gene TP53. The mutation, TP53 R248Q, promoted resistance to multiple chemotherapy drugs, including vincristine, daunorubicin and cytarabine.

Working in two cell lines in the laboratory, Zhou and his colleagues replicated the thiopurine-induced TP53 mutations and chemotherapy resistance. The research provided the first direct genomic and experimental evidence of chemotherapy-induced drug resistance mutations. "This study not only changes our ALL treatment considerations, but also opens the door to study mechanistically how defective repair generates drug-resistant mutations," Zhou said.

Researchers estimate that treatment-induced mutations play a role in 25% of pediatric ALL relapse. Eight percent of patients in this study had evidence of the thiopurine-associated mismatch-repair signature.

"In the future, it may be possible to monitor bone marrow during treatment as a way to detect these mutational signatures early enough to help identify at-risk patients who may be candidates for emerging therapies like CAR-T cells," Zhang said. But the researchers stressed that the benefits of thiopurine treatment outweigh the risks, noting that most patients are unaffected by thiopurine-induced mutations.