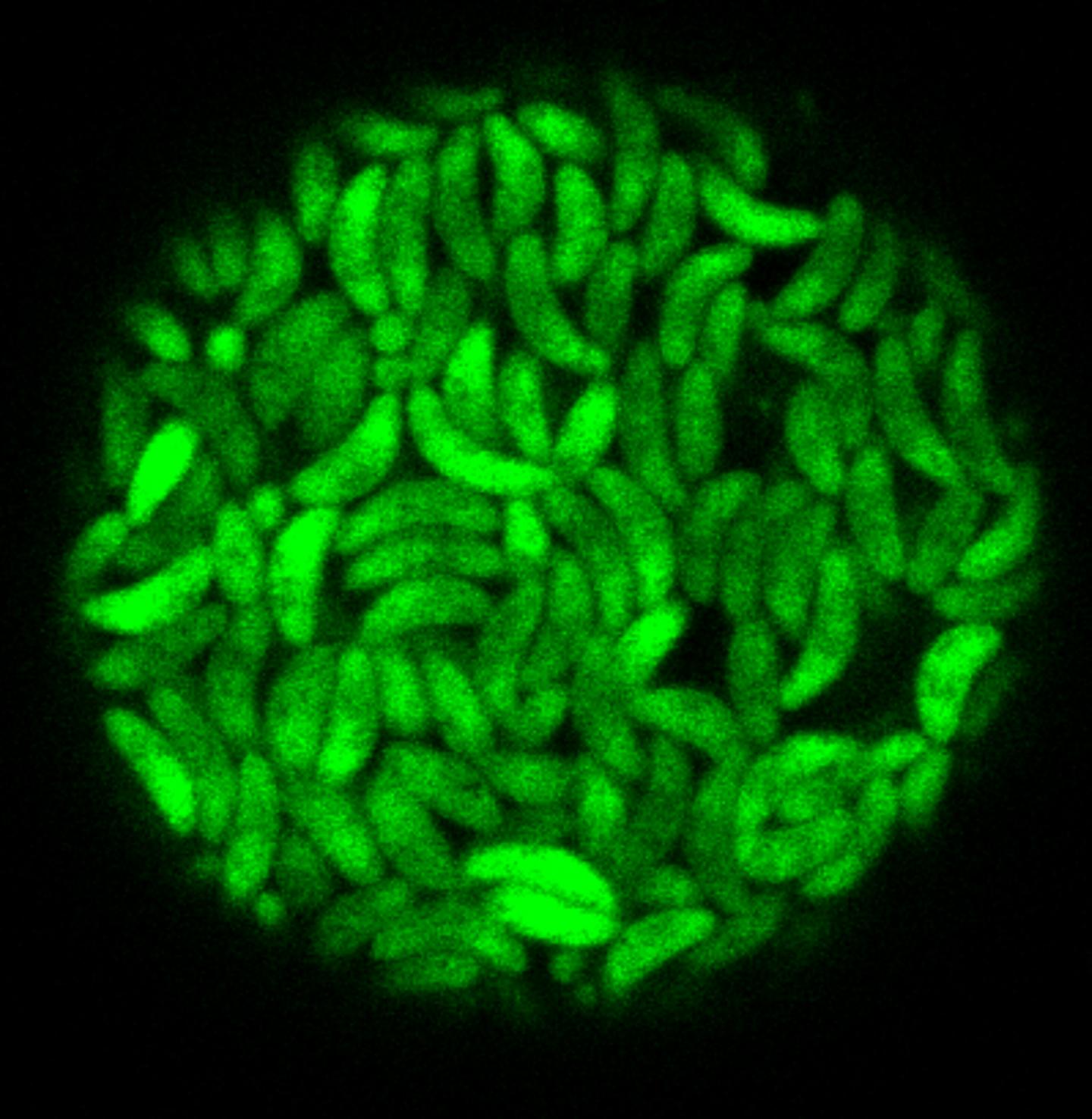 IMAGE: This image shows GFP fluorescent bradyzoites within a tissue cyst isolated from the brain of a mouse infected with Toxoplasma gondii.

The cat parasite Toxoplasma gondii is known to cause infected rodents to lose their fear of feline predators, which makes the mice easier to catch. Predators then spread the parasites through their feces. But this so-called fatal feline attraction theory is flawed, suggests a study publishing January 14 in the journal Cell Reports. Rather than exhibiting a loss of feline-specific fear, infected rodents actually show a decrease in general anxiety and reduced aversion to a wide range of threats.

"For 20 years, T. gondii has served as a textbook example for a parasitic adaptive manipulation, mainly because of the specificity of this manipulation," says co-senior study author Ivan Rodriguez of the University of Geneva. "We now show that the behavioral alteration does not only affect fear of feline predators but that major changes occur in the brain of infected mice, affecting various behaviors and neural function in general."

T. gondii is a single-celled parasite that infects most species of warm-blooded animals, including humans, and causes the disease toxoplasmosis. Toxoplasma can persist for long periods of time in the body, possibly even for a lifetime. More than 40 million people in the United States may carry the parasite.

While very few infected humans have symptoms, toxoplasmosis is considered to be a leading cause of death attributed to foodborne illness in the United States. Infection during pregnancy can result in fetal death, and toxoplasmosis is also a threat in individuals with compromised immune systems, such as HIV-infected individuals. With a worldwide prevalence of about 30% in the human population, latent toxoplasmosis is a risk factor for several mental illnesses, including schizophrenia, Parkinson's disease, and bipolar disorder, as well as traffic accidents and suicide attempts.

Past studies have also shown that T. gondii causes a phenomenon known as fatal feline attraction--a decrease in aversion to cat odors in infected rodents. After infected rodents are eaten by feline predators, the parasite is passed through cat feces to various hosts, facilitating parasite spreading.

"It was particularly intriguing for us to understand how the parasite achieves a specific alteration of the neural circuits involved in the fear responses toward feline predators, something that has never been elucidated," says co-senior study author Dominique Soldati-Favre of the University of Geneva. "Our initial idea was to investigate the molecular mechanisms behind this behavioral manipulation. But considering that many contradictory or inconsistent results have been reported regarding the effects of T. gondii infection on rodent behavior, we later decided to reappraise the dogma."

In the new study, the researchers found that T. gondii infection does not selectively reduce fear of feline predators. Mice infected with the parasite for five to 10 weeks spent more time in the open arms of an elevated plus maze and showed more exploratory behaviors in novel environments compared to uninfected mice. In addition, infected mice did not show the normal preference for interacting with a nonaggressive male mouse compared with objects such as a metallic cube and an apple.

While uninfected mice showed avoidant, defensive, and anxiety-related behavioral responses to a potential threat--the hand of an experimenter--infected mice quickly touched the hand and thoroughly interacted with it. "Taken together, these findings suggest that chronic T. gondii infection reduces anxiety and risk aversion while increasing curiosity and exploratory behavior," says co-first author Madlaina Boillat of the University of Geneva.

Another set of experiments showed that T. gondii infection reduces fear of various animals, including non-predators. Consistent with previous studies, infected mice, but not uninfected mice, were clearly attracted to bobcat urine. But infected mice also spent more time investigating guinea pig and fox odors compared with uninfected mice, showing no particular preference for bobcat odor. While uninfected mice froze in fear in the presence of an anesthetized rat, infected mice boldly walked over the rat. "These results contrast with the prevailing idea that the parasite's manipulation of host behavior specifically targets neural circuits responding to feline predators," says co-first author Pierre-Mehdi Hammoudi of the University of Geneva.

To further examine this question, the researchers used light-sheet microscopy to accurately map the brain-wide distribution, size, and number of cysts at unprecedented resolution in 3D. Analysis of the whole brains of mice 10 to 12 weeks after infection showed that the density of parasite-filled tissue cysts was especially high in the cerebral cortex--the outer tissue layer in the brain--especially brain regions involved in processing visual information. However, cyst localization was widespread, and cyst number and distribution varied widely across mice, suggesting a random infection and dissemination process.

Importantly, additional analyses showed that the severity of T. gondii-induced behavioral changes was associated with cyst load and neuroinflammation. "Taken together, the findings point toward behavioral manipulation mediated by neuronal inflammation rather than direct interference of the parasite itself with specific neuronal populations," Rodriguez says. "It is not a simple on/off system. In the future, the level of chronic infection should therefore always be taken into account when studying effects of T. gondii on its host."

Even though the behavioral effects induced by T. gondii infection are not specific, they are still adaptive for the parasite. Infected rodents are presumably easier to catch by various predators, facilitating parasite spreading. On the other hand, research on the protozoan parasite Eimeria vermiformis, which also reduces predator fear in infected mice, suggests that the behavioral effects of infection are not adaptive in all cases.

Moving forward, the researchers plan to examine in more detail how neuroinflammation can alter behavioral traits such as anxiety, sociability, or curiosity. In the meantime, they urge caution in translating the findings more broadly, noting that humans generally exhibit fewer symptoms than rodents following T. gondii infection. "We hope that people understand that they will not get the 'crazy cat lady syndrome' if they are infected with T. gondii," Soldati-Favre says. "Although it seems that subtle behavioral changes may occur in humans, the inflammation in the human brain might never reach the same level as laboratory infected mice."