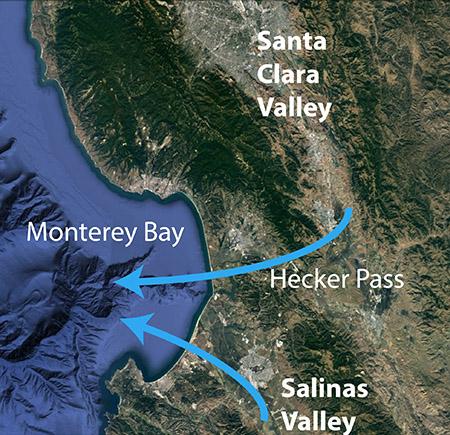 IMAGE: This map shows how carbon dioxide blows from land areas out across Monterey Bay with morning land breezes

MOSS LANDING, CA--MBARI researchers recently measured high concentrations of carbon dioxide in air blowing out to sea from cities and agricultural areas, including Silicon Valley. In a new paper in PLOS ONE, they calculate that this previously undocumented process could increase the amount of carbon dioxide dissolving into coastal ocean waters by about 20 percent.

Extending their calculations to coastal areas around the world, the researchers estimate that this process could add 25 million additional tons of carbon dioxide to the ocean each year, which would account for roughly one percent of the ocean's total annual carbon dioxide uptake. This effect is not currently included in calculations of how much carbon dioxide is entering the ocean because of the burning of fossil fuels.

Less than half of the carbon dioxide that humans have released over the past 200 years has remained in the atmosphere. The remainder has been absorbed in almost equal proportions by the ocean and terrestrial ecosystems. How quickly carbon dioxide enters the ocean in any particular area depends on a number of factors, including the wind speed, the temperature of the water, and the relative concentrations of carbon dioxide in the surface waters and in the air just above the sea surface.

MBARI has been measuring carbon dioxide concentrations in the air and seawater of Monterey Bay almost continuously since 1993. But it wasn't until 2017 that researchers began looking carefully at the atmospheric data collected from sea-surface robots. "One of our summer interns, Diego Sancho-Gallegos, analyzed the atmospheric carbon dioxide data from our research moorings and found much higher levels than expected," explained MBARI Biological Oceanographer Francisco Chavez.

Chavez continued, "If these measurements had been taken on board a ship, researchers would have thought the extra carbon dioxide came from the ship's engine exhaust system and would have discounted them. But our moorings and surface robots do not release carbon dioxide to the atmosphere."

Although atmospheric scientists had previously noticed early-morning peaks in carbon dioxide concentrations in some cities and agricultural areas, this was the first time such peaks had been measured over ocean waters. The finding also contradicted a common scientific assumption that concentrations of carbon dioxide over ocean areas do not vary much over time or space.

"Because we had measurements from the Wave Glider at many different locations around the bay," Northcott explained, "I could use the Wave Glider's position and the speed and direction of the wind to triangulate the direction the carbon dioxide was coming from."

"We had this evidence that the carbon dioxide was coming from an urban area," explained Northcott. "But when we looked at the scientific literature, there was nothing about air from urban areas affecting the coastal ocean. People had thought about this, but no one had measured it systematically before."

The researchers see this paper not as a last word, but as a "wake-up call" to other scientists. "This brings up a lot of questions that we hope other researchers will look into," said Chavez. "One of first and most important things would be to make detailed measurements of carbon dioxide in the atmosphere and ocean in other coastal areas. We need to know if this is a global phenomenon. We would also like to get the atmospheric modelling community involved."

"We've estimated that this could increase the amount of carbon dioxide entering coastal waters by roughly 20 percent," said Chavez. "This could have an effect on the acidity of seawater in these areas. Unfortunately, we don't have any good way to measure this increase in acidity because carbon dioxide takes time to enter the ocean and carbon dioxide concentrations vary dramatically in coastal waters."

"There must be other pollutants in this urban air that are affecting the coastal ocean as well," he added.

"This is yet another case where the data from MBARI's autonomous robots and sensors has led us to new and unexpected discoveries," said Chavez. "Hopefully other scientists will see these results and will want to know if this is happening in their own backyards."