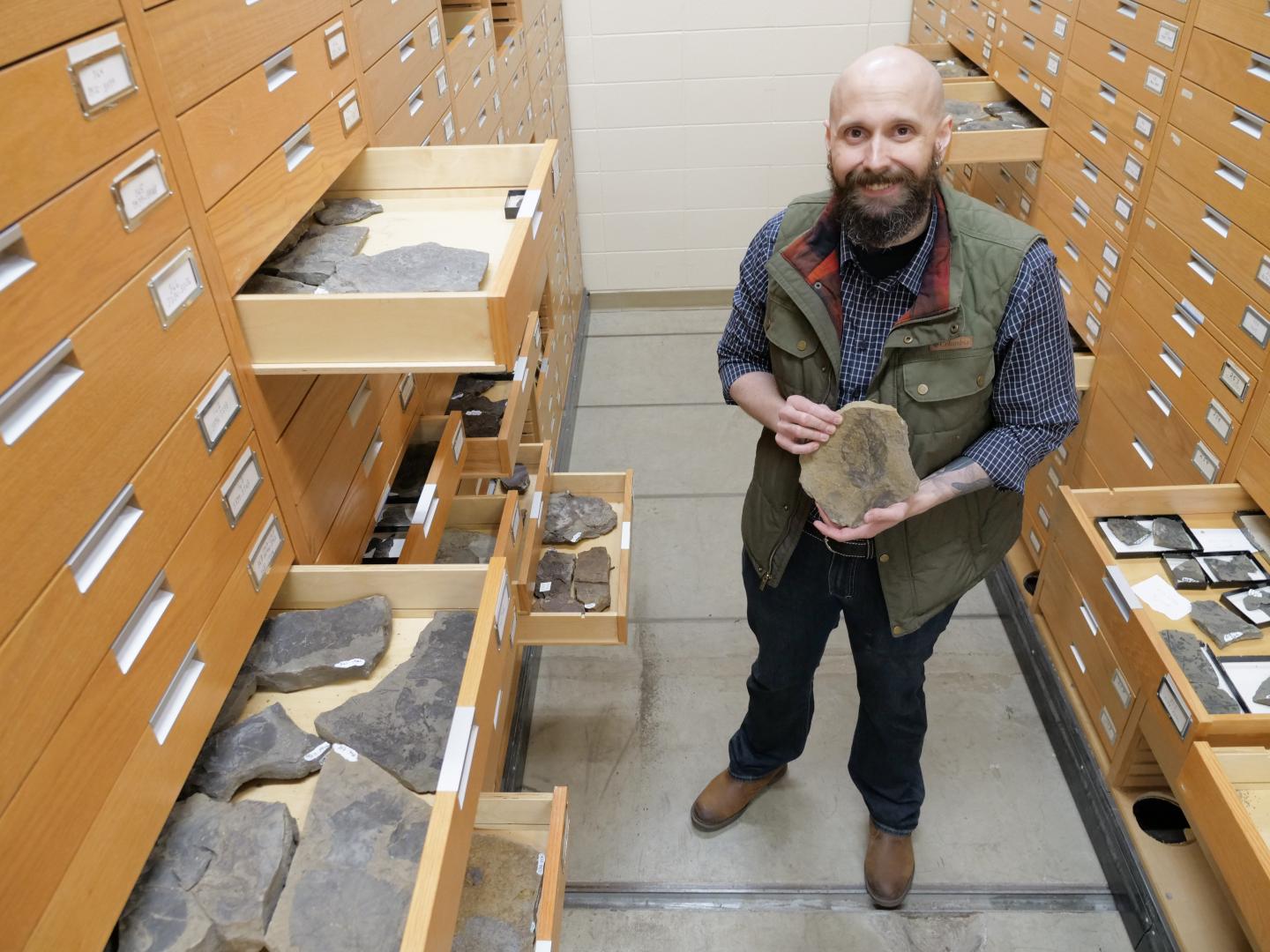 IMAGE: Christopher West in the midst of 4,000 fossils from the USask fossil collection.

SASKATOON--The heady aroma of magnolia blossoms and lotus flowers might have wafted to your nostrils if you had gone for a walk 56 million years ago in the lush green forest which covered Canada's northernmost islands.

Now covered in ice and snow, present-day Ellesmere and Axel Heiberg islands in Nunavut were once home to a vibrant, temperate forest, according to fossil research just published by University of Saskatchewan (USask) scientists.

"It's very surprising how similar these ancient polar forests were to some of our modern forests. I identified fossil plants related to many modern temperate trees: birch, alder, elms--even plants belonging to the grape family. Some of the fossils are related to trees now found only in east Asia," said paleobotanist Christopher West, a recent USask PhD graduate.

"The presence of these forests gives us an idea about what could happen over long periods of time if our modern climate continues to warm, and also how forest ecosystems responded to greenhouse climates in the distant past," said West.

West examined more than 5,000 fossil samples to develop the only comprehensive analysis of fossil plants ever undertaken from the Canadian Arctic.

"This research is the cumulative effort of almost 40 years of work on fossil plants of the Canadian North undertaken by me and my students, including 20 field seasons on Ellesmere and Axel Heiberg islands," said USask geologist Jim Basinger, who co-supervised the work with David Greenwood, USask adjunct professor of geology and Brandon University biology professor.

The results published today in the highly respected journal Palaeontographica B include identifications and detailed descriptions of 83 types of plants from high arctic latitudes in Canada during the early Eocene epoch, around 56 million years ago.

"We won't see a return to a forested polar region in our lifetimes, but it is important to remember that we as humans have become agents of climate change, and that our warming climate will have potentially dramatic effects on our modern ecosystems," said West.

While Earth was considerably warmer during the early Eocene, the continents were mostly situated where they are now, and northern latitudes would have had lengthy periods of darkness. Despite the nearly total lack of light, the forests persisted, likely because of just how warm it was.

"If we are able to understand how ecosystems long ago responded to global warming, we may be able to better predict how our own modern ecosystems will respond to our own rapidly warming climate," said West. "This research will also help climate modelers as they use data from the past to better understand our own climate."

The next steps in the research are to examine fossils from Axel Heiberg Island from a slightly younger vintage--roughly 45 million years old--to understand better the ancient impacts of that climate change.