Brightest gamma ray on Earth -- for a safer, healthier world

The brightest gamma ray beam ever created- more than a thousand billion times more brilliant than the sun- has been produced in research led at the University of Strathclyde- and could open up new possibilities for medicine.

Physicists have discovered that ultra-short duration laser pulses can interact with ionised gas to give off beams that are so intense they can pass through 20 cm of lead and would take 1.5 m of concrete to be completely absorbed.

The ray could have several uses, such as in medical imaging, radiotherapy and radioisotope production for PET (positron emission tomography) scanning. The source could also be useful in monitoring the integrity of stored nuclear waste.

In addition, the laser pulses are short enough- lasting a quadrillionth of a second- to capture the response of a nucleus to stimuli, making the rays ideal for use in lab-based study of the nucleus.

The device used in the research is smaller and less costly than more conventional sources of gamma rays, which are a form of X-rays.

The experiments were carried out on the Gemini laser in the Central Laser Facility at the Science and Technology Facilities Council's Rutherford Appleton Laboratory. Strathclyde was also joined in the research by University of Glasgow and Instituto Superior Técnico in Lisbon.

Professor Dino Jaroszynski of Strathclyde, who led the research, said: "This is a great breakthrough, which could make the probing of very dense matter easier and more extensive, and so allow us to monitor nuclear fusion capsules imploding. 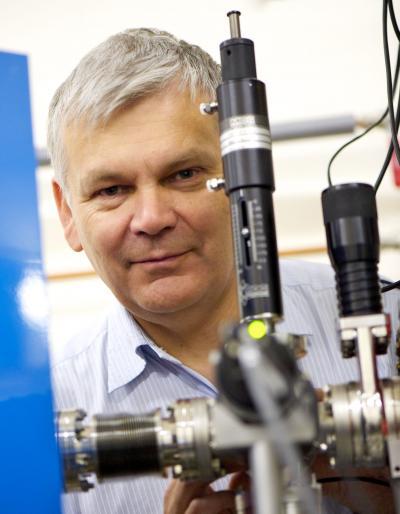 This is professor Dino Jaroszynski of the University of Strathclyde.

"To prove this we have imaged very thin wires - 25 microns thick - with gamma rays and produced very clear images using a new method called phase-contrast imaging. This allows very weakly absorbing material to be clearly imaged. Matter illuminated by gamma rays only cast a very weak shadow and therefore are invisible. Phase-contrast imaging is the only way to render these transparent objects visible.

"It could also act as a powerful tool in medicine for cancer therapy and there is nothing else to match the duration of the gamma ray pulses, which is also why it is so bright.

"In nature, if you accelerate charged particles, such as electrons, they radiate. We trapped particles in a cavity of ions trailing an intense laser pulse and accelerated these to high energies. Electrons in this cavity also interact with the laser and pick up energy from it and oscillate wildly - much like a child being pushed on a swing. The large swinging motion and the high energy of the electrons allow a huge increase in the photon energy to produce gamma rays. This enabled the gamma ray photons to outshine any other earthbound source.

"The accelerator we use is a new type called a laser-plasma wakefield accelerator which uses high power lasers and ionised gas to accelerate charged particles to very high energies - thus shrinking a conventional accelerator, which is 100m long, to one which fits in the palm of your hand."

The research was supported by the Engineering and Physical Sciences Research Council, the Science and Technology Facilities Council, the Laserlab-Europe Consortium and the Extreme Light Infrastructure project. It is linked to SCAPA (Scottish Centre for the Application of Plasma-based Accelerators), which is based at Strathclyde and is run through the Scottish Universities Physics Alliance.

The research has been published in the journal Nature Physics. 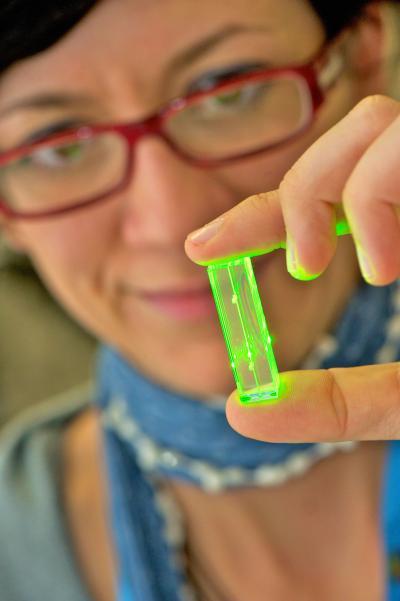 This is student and research associate Silvia Cipiccia of the University of Strathclyde.