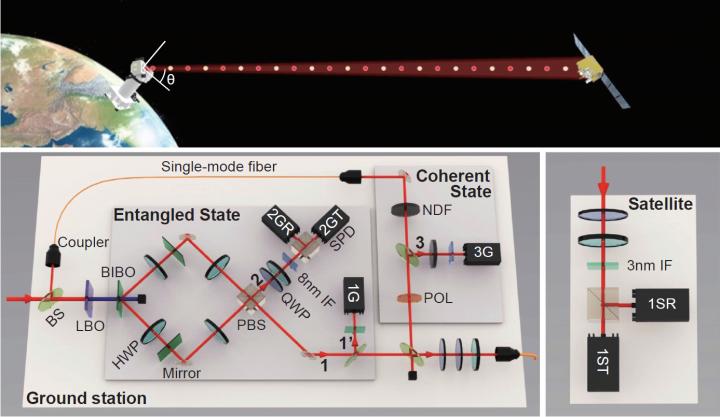 Image:
provided by University of Science and Technology of China

Quantum mechanics and the general theory of relativity form the bedrock of the current understanding of physics - yet the two theories don't seem to work together. Physical phenomena rely on relationship of motion between the observed and the observer. Certain rules hold true across types of observed objects and those observing, but those rules tend to break down at the quantum level, where subatomic particles behave in strange ways.

An international team of researchers developed a unified framework that would account for this apparent break down between classical and quantum physics, and they put it to the test using a quantum satellite called Micius. They published their results ruling out one version of their theory on Sept 19th in Science.

Micius is part of a Chinese research project called Quantum Experiments at Space Scale (QUESS), in which researchers can examine the relationship with quantum and classical physics using light experiments. In this study, the researchers used the satellite to produce and measure two entangled particles.

"Thanks to the advanced technologies made available by Micius, for the first time in human history, we managed to perform a meaningful quantum optical experiment testing the fundamental physics between quantum theory and gravity," said Jian-Wei Pan, paper author and director of the CAS center for Excellence in Quantum Information and Quantum Physics at the University of Science and Technology of China

The theory Pan and the team tested was that the particles would decorrelate from one another as they passed through separate gravitational regions of Earth. The different gravitational pulls would force a quantum interaction that behaved as classical relativism would - the particle in less gravity would move with less constraint than the one in stronger gravity.

According to Pan, this "event formalism" attempts to present a coherent description of quantum fields as they exist in exotic spacetime, which contains closed time-like curves, and ordinary space time. Event formalism standardized behavior across quantum and classical physics.

"If we did observe the deviation, it would mean that event formalism is correct, and we must substantially revise our understanding of the interplay between quantum theory and gravity theory," Pan said. "However, in our experiment, we ruled out the strong version of event formalism, but there are other versions to test."

The researchers did not see the particles deviate from the expected interactions predicted by the quantum understanding of gravity, but they plan to test a version of their theory that allows for a little more flexibility.

"We ruled out the strong version of event formalism, but a modified model remains an open question," Pan said.

To test this version, Pan and the team will launch a new satellite that will orbit 20 to 60 times higher than Micius to test a wider field of gravity strength.