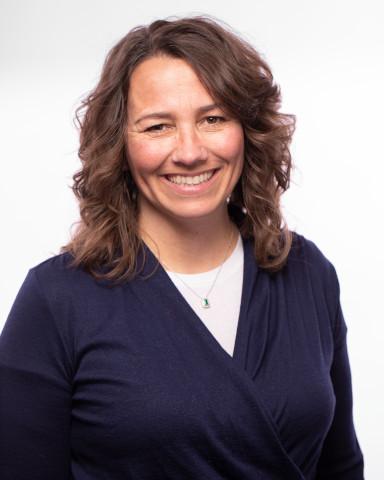 IMAGE: Christine Langton at UMass Amherst, with others in a new epidemiological analysis of more than 108,000 women observed a lower risk of early menopause among women who had at least...

AMHERST, Mass. - Results of a new epidemiological analysis of more than 108,000 women observed a lower risk of early menopause among women who had at least one pregnancy lasting at least six months and among those who had breastfed their infants. Further, risk was lowest among those who breastfed exclusively. The work is by first author and Ph.D. student Christine Langton, with her advisor Elizabeth Bertone-Johnson at the University of Massachusetts Amherst's School of Public Health and Health Sciences.

These two factors, pregnancy (parity) and breastfeeding, generally prevent ovulation and may slow the natural depletion of ovarian follicles over time, the authors point out. Thus pregnancy and breastfeeding are believed to lower the risk of early menopause, which is defined as the end of menstruation before age 45. Early menopause is associated with increased risk of cardiovascular disease, cognitive decline and osteoporosis. Details appear in the online open-access journal JAMA Network Open.

Langton and colleagues suggest that while their results did not demonstrate a clear dose-response for breastfeeding, their findings are consistent with the hypothesis that a biological mechanism is influenced by longer breastfeeding. Also, findings from other studies support that optimal benefits from breastfeeding exclusively, for both mother and baby, reach a threshold between six and 12 months. Breastfeeding exclusively means that the baby receives no liquids or solid foods, only breast milk.

Langton says, "Our study has a lot of strength because of the large sample size, the 26 years of follow-up and the prospective design. Also, at baseline we limited our study to women who were premenopausal, which is a key point," she adds, along with their careful control for many confounders.

"Our breastfeeding findings not only add new insight into ways to prevent early menopause," she points out, "but they align nicely with recommendations of both the American Academy of Pediatrics and World Health Organization that US women exclusively feed their infants breastmilk for at least six months and continue breastfeeding for up to one year," Langton notes.

For this work, Langton and colleagues conducted their prospective, population-based study within the on-going Nurses' Health Study II cohort that began collecting data in 1989. They report that response rates were 85-90%. Parity, menopause status and age were measured at baseline and every two years, while breastfeeding factors were assessed three times during follow-up. Women in the study were followed until menopause or age 45, hysterectomy, oophorectomy, death, cancer diagnosis or loss to follow-up.