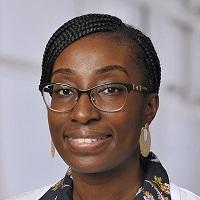 IMAGE: Samilia Obeng-Gyasi, MD (The Ohio State University) is the lead author on an analysis of the insurance status of 9800 breast cancer patients and their clinical outcomes. The analysis was...

A retrospective study of nearly 9800 women with breast cancer who participated in randomized clinical trials was presented today at the 2019 San Antonio Breast Cancer Symposium. The study found that women with government insurance (Medicaid or Medicare) were much less likely to participate in a clinical trial compared to their privately insured counterparts. The few women with government insurance who did participate in the trials were more likely to stop treatment early and had lower survival. The study was conducted by researchers in the ECOG-ACRIN Cancer Research Group (ECOG-ACRIN) with funding from the National Cancer Institute, part of the National Institutes of Health.

"Having insurance in and of itself was not enough to ensure access to a clinical trial or a good clinical outcome," said lead researcher Samilia Obeng-Gyasi, MD, a breast surgical oncologist at The Ohio State University who studies social determinants of cancer care.

Dr. Obeng-Gyasi and colleagues looked at data from women who participated in two large ECOG-ACRIN trials testing chemotherapy treatments. Study E1199 enrolled participants from 1999 to 2002 and study E5103 enrolled participants between 2007 and 2011. In the current analysis, Dr. Obeng-Gyasi and colleagues evaluated each participant's insurance coverage and neighborhood socioeconomic status at the time they entered the trial, to determine if either status affected the women's clinical outcomes later on.

Insurance status was either private, government (Medicaid, Medicare), or self-pay. Only about 13% of participants in each of the two trials had government insurance. The majority of patients had private insurance (85.6% in E1199 and 82% in E5103).

The researchers determined the neighborhood socioeconomic status of each participant by linking their zip code to county-level data on occupation, income, poverty, wealth, education, and crowding.

There was no association between neighborhood socioeconomic status and trial completion or survival.

"Insurance appears to be a powerful determinant of clinical trial outcomes," said Dr. Obeng-Gyasi. "With continued changes to insurance at the federal and state levels, physicians and policy-makers would benefit from having more data such as what we produced in our study. Right now, most clinical trials do not collect data on social determinants of health. If they did, the information could lead us to better understand the interaction of insurance status and many other factors on the clinical outcomes of clinical trial participants."