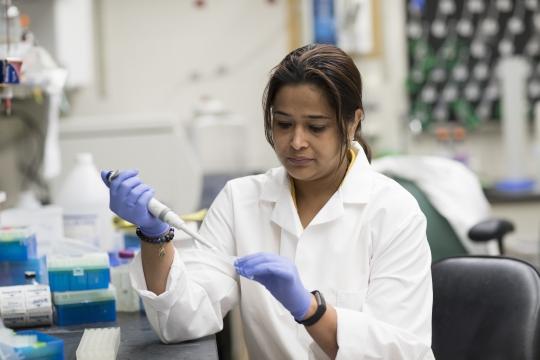 University of Virginia Cancer Center researchers have identified a gene responsible for the spread of triple-negative breast cancer to other parts of the body - a process called metastasis - and developed a potential way to stop it.

Triple negative breast cancer (TNBC) is an aggressive form of breast cancer that accounts for 40,000 deaths in the United States annually. The majority of these deaths result from resistance to chemotherapy and subsequent aggressive metastases. So UVA researchers asked: What causes a primary tumor to become metastatic? This is an important question in cancer biology because patients with metastatic tumors have the highest death rate.

UVA's Sanchita Bhatnagar, PhD, and her team found that the breast cancer oncogene TRIM37 not only causes the cancer to spread but also makes it resistant to chemotherapy. A new approach she and her colleagues have developed could possibly address both, the researchers hope.

"Despite metastasis being the key reason for failure of cancer therapies, it remains poorly understood. We do not clearly understand what drives the metastatic growth in patients," said Bhatnagar, who was the first to identify TRIM37 as a breast cancer oncogene. "In general, several genes are altered during tumorigenesis. However, whether targeting the same genes will prevent metastatic transition remains to be addressed."

Bhatnagar and UVA's Jogender Tushir-Singh, PhD, have developed a new approach to stop the effects of TRIM37 and, hopefully, prevent or significantly delay the spread of triple-negative breast cancer. This could also lower the disease's defenses against chemotherapy.

Bhatnagar and Tushir-Singh's approach uses nanoparticles - microscopic balls of fat - to deliver treatment to block TRIM37. These nanoparticles are paired with specially engineered antibodies that bind to the cancerous cells but not to healthy cells. "As soon as the antibody finds the triple negative breast cancer cell, it binds to the receptor and is taken up by the cell," explained Tushir-Singh, of UVA's Department of Biochemistry and Molecular Genetics.

"It is a kiss of death," Bhatnagar said, "that selectively reduces the expression of TRIM37 in cancer cells and prevents the spread."

The approach could be used to deliver targeted treatments for many other cancers as well, the researchers report. "That would not only get the treatment where it needs to be but, hopefully, help prevent unwanted side effects. Besides preventing metastases, it adds selectivity," Bhatnagar said.

"A problem in the field is, how will you give [a nanoparticle treatment] to the patients? Most of these nanoparticles are cleared by the liver, so they never have a chance to really do their job," she said. "In this study, researchers bypassed this issue by delivering nanoparticles by nasal route, increasing the rate of uptake in the lungs - one of the most common metastatic target sites in TNBC patients."

The development of the new approach is in its early stages, but tests with lab mice have offered encouraging indications. "The lungs showed dramatic reduction in metastatic lesions after the treatment in comparison to the mice that received no treatment," Bhatnagar said.

To verify that TRIM37 targeting might offer a potential treatment approach, Bhatnagar teamed up with Tushir-Singh, her husband, to test it in the lab. "And we find that our targeted nanoparticles significantly reduce metastatic lesions in the lungs of spontaneous metastatic murine [mouse] models - both immune compromised and immune sufficient," she said. "This is an important proof-of-concept much needed for the bench-to-clinic transition of these important findings."

Clinically, most women in the early stages of breast cancer are treated with surgery, followed by radiation or chemotherapy. However, metastasis remains a challenging medical problem. Bhatnagar's research offers a potential way to target a driver of metastasis that she hopes will prevent or slow metastatic progression and improve overall survival.

Much more work needs to be done, but Bhatnagar's research is being noticed by pharmaceutical companies interested in exploring the approach's potential. "This is a delivery platform, not only for targeting our protein of interest but for many other chemotherapeutic drugs that can be packaged into the nanoparticles and selectively delivered," Bhatnagar said.