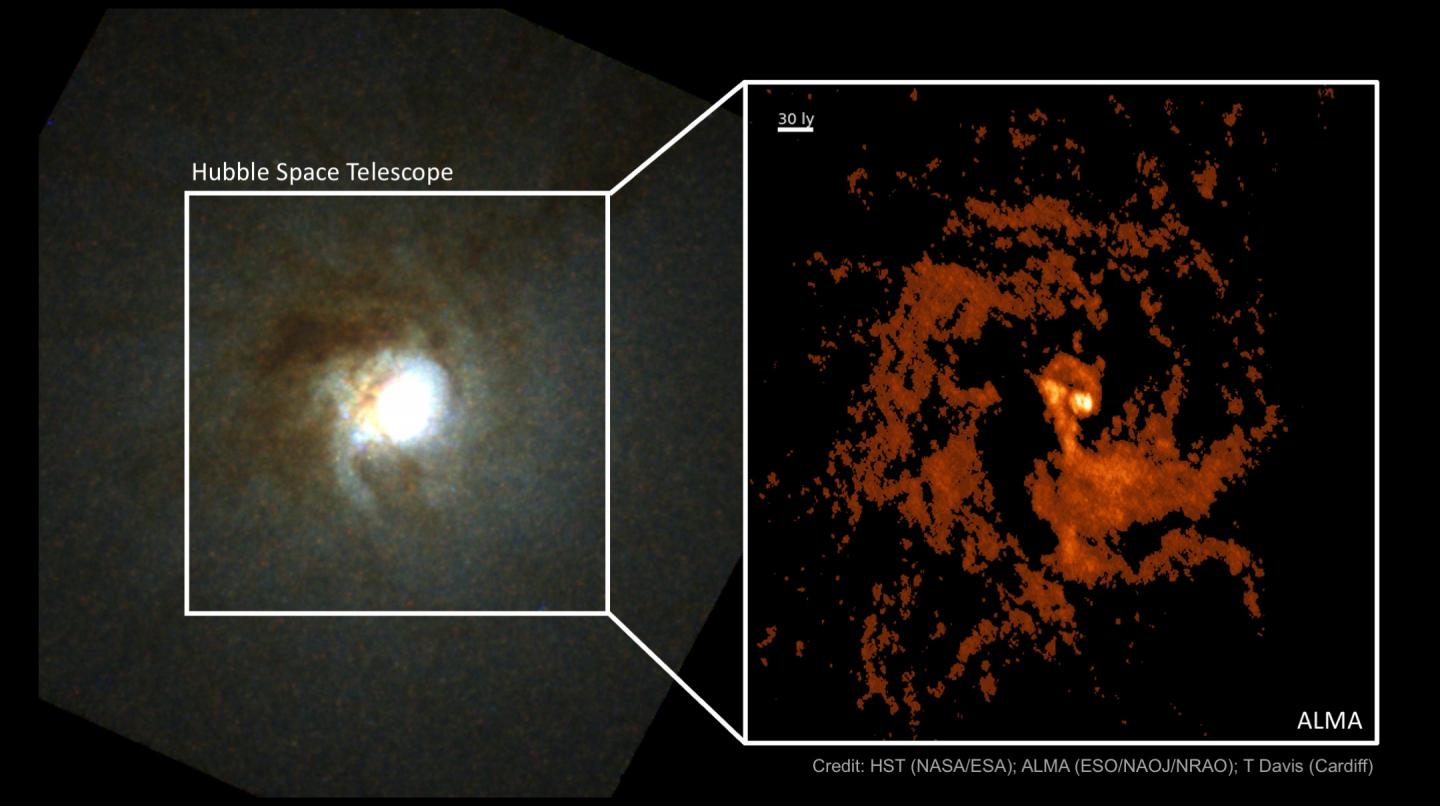 IMAGE:  "On the left is shown a colour composite Hubble Space Telescope image of the centre of `Mirachs Ghost'. On the right is shown the new ALMA image of this same...

A research team led by Cardiff University scientists say they are closer to understanding how a supermassive black hole (SMBH) is born thanks to a new technique that has enabled them to zoom in on one of these enigmatic cosmic objects in unprecedented detail.

Scientists are unsure as to whether SMBHs were formed in the extreme conditions shortly after the big bang, in a process dubbed a 'direct collapse', or were grown much later from 'seed' black holes resulting from the death of massive stars.

If the former method were true, SMBHs would be born with extremely large masses - hundreds of thousands to millions of times more massive than our Sun - and would have a fixed minimum size.

If the latter were true then SMBHs would start out relatively small, around 100 times the mass of our Sun, and start to grow larger over time by feeding on the stars and gas clouds that live around them.

Astronomers have long been striving to find the lowest mass SMBHs, which are the missing links needed to decipher this problem.

In a study published today, the Cardiff-led team has pushed the boundaries, revealing one of the lowest-mass SMBHs ever observed at the centre of a nearby galaxy, weighing less than one million times the mass of our sun.

The SMBH lives in a galaxy that is familiarly known as "Mirach's Ghost", due to its close proximity to a very bright star called Mirach, giving it a ghostly shadow.

The findings were made using a new technique with the Atacama Large Millimeter/submillimeter Array (ALMA), a state-of-the-art telescope situated high on the Chajnantor plateau in the Chilean Andes that is used to study light from some of the coldest objects in the Universe.

"The SMBH in Mirach's Ghost appears to have a mass within the range predicted by 'direct collapse' models," said Dr Tim Davis from Cardiff University's School of Physics and Astronomy.

"We know it is currently active and swallowing gas, so some of the more extreme 'direct collapse' models that only make very massive SMBHs cannot be true.

"This on its own is not enough to definitively tell the difference between the 'seed' picture and 'direct collapse' - we need to understand the statistics for that - but this is a massive step in the right direction."

Black holes are objects that have collapsed under the weight of gravity, leaving behind small but incredibly dense regions of space from which nothing can escape, not even light.

An SMBH is the largest type of black hole that can be hundreds of thousands, if not billions, of times the mass of the Sun.

It is believed that nearly all large galaxies, such as our own Milky Way, contain an SMBH located at its centre.

"SMBHs have also been found in very distant galaxies as they appeared just a few hundred million years after the big bang", said Dr Marc Sarzi, a member of Dr. Davis' team from the Armagh Observatory & Planetarium.

"This suggest that at least some SMBHs could have grown very massive in a very short time, which is hard to explain according to models for the formation and evolution of galaxies."

"All black holes grow as they swallow gas clouds and disrupt stars that venture too close to them, but some have more active lives than others."

"Looking for the smallest SMBHs in nearby galaxies could therefore help us reveal how SMBHs start off," continued Dr. Sarzi.

In their study, the international team used brand new techniques to zoom further into the heart of a small nearby galaxy, called NGC404, than ever before, allowing them to observe the swirling gas clouds that surrounded the SMBH at its centre.

The ALMA telescope enabled the team to resolve the gas clouds in the heart of the galaxy, revealing details only 1.5 light years across, making this one of the highest resolution maps of gas ever made of another galaxy.

Being able to observe this galaxy with such high resolution enabled the team to overcome a decade's worth of conflicting results and reveal the true nature of the SMBH at the galaxy's centre.

"Our study demonstrates that with this new technique we can really begin to explore both the properties and origins of these mysterious objects," continued Dr Davis.

"If there is a minimum mass for a supermassive black hole, we haven't found it yet."