Blushing plants reveal when fungi are growing in their roots 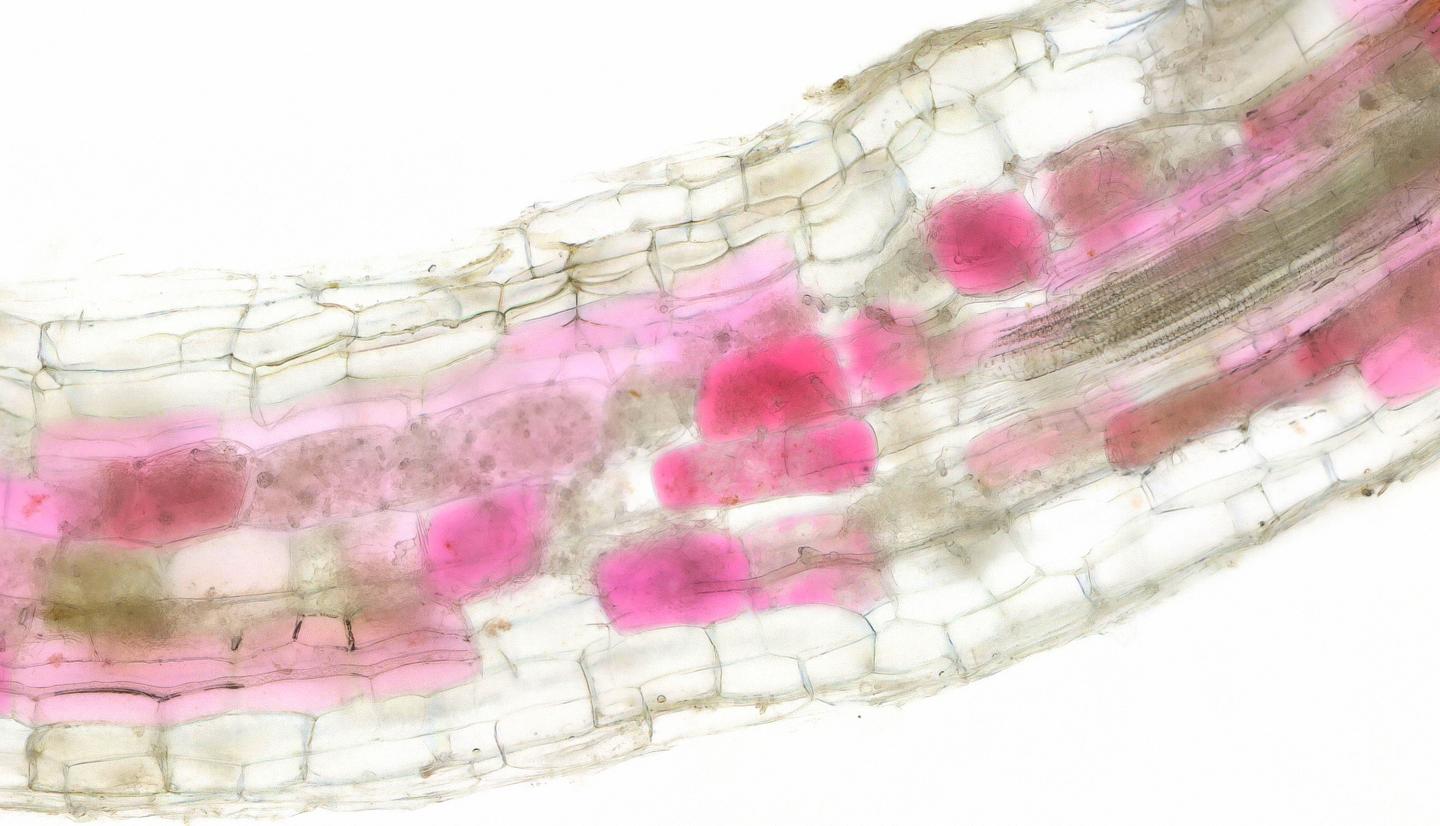 Almost all crop plants form associations with a particular type of fungi - called arbuscular mycorrhiza fungi - in the soil, which greatly expand their root surface area. This mutually beneficial interaction boosts the plant's ability to take up nutrients that are vital for growth.

The more nutrients plants obtain naturally, the less artificial fertilisers are needed. Understanding this natural process, as the first step towards potentially enhancing it, is an ongoing research challenge. Progress is likely to pay huge dividends for agricultural productivity.

In a study published in the journal PLOS Biology, researchers used the bright red pigments of beetroot - called betalains - to visually track soil fungi as they colonised plant roots in a living plant.

"We can now follow how the relationship between the fungi and plant root develops, in real-time, from the moment they come into contact. We previously had no idea about what happened because there was no way to visualise it in a living plant without the use of elaborate microscopy," said Dr Sebastian Schornack, a researcher at the University of Cambridge's Sainsbury Laboratory and joint senior author of the paper.

To achieve their results, the researchers engineered two model plant species - a legume and a tobacco plant - so that they would produce the highly visible betalain pigments when arbuscular mycorrhiza fungi were present in their roots. This involved combining the control regions of two genes activated by mycorrhizal fungi with genes that synthesise red-coloured betalain pigments.

The plants were then grown in a transparent structure so that the root system was visible, and images of the roots could be taken with a flatbed scanner without disturbing the plants.

Using their technique, the researchers could select red pigmented parts of the root system to observe the fungus more closely as it entered individual plant cells and formed elaborate tree-like structures - called arbuscules - which grow inside the plant's roots. Arbuscules take up nutrients from the soil that would otherwise be beyond the reach of the plant.

Other methods exist to visualise this process, but these involve digging up and killing the plant and the use of chemicals or expensive microscopy. This work makes it possible for the first time to watch by eye and with simple imaging how symbiotic fungi start colonising living plant roots, and inhabit parts of the plant root system over time.

"This is an exciting new tool to visualise this, and other, important plant processes. Beetroot pigments are a distinctive colour, so they're very easy to see. They also have the advantage of being natural plant pigments, so they are well tolerated by plants," said Dr Sam Brockington, a researcher in the University of Cambridge's Department of Plant Sciences, and joint senior author of the paper.

Mycorrhiza fungi are attracting growing interest in agriculture. This new technique provides the ability to 'track and trace' the presence of symbiotic fungi in soils from different sources and locations. The researchers say this will enable the selection of fungi that colonise plants fastest and provide the biggest benefits in agricultural scenarios.

Understanding and exploiting the dynamics of plant root system colonisation by fungi has potential to enhance future crop production in an environmentally sustainable way. If plants can take up more nutrients naturally, this will reduce the need for artificial fertilisers - saving money and reducing associated water pollution.