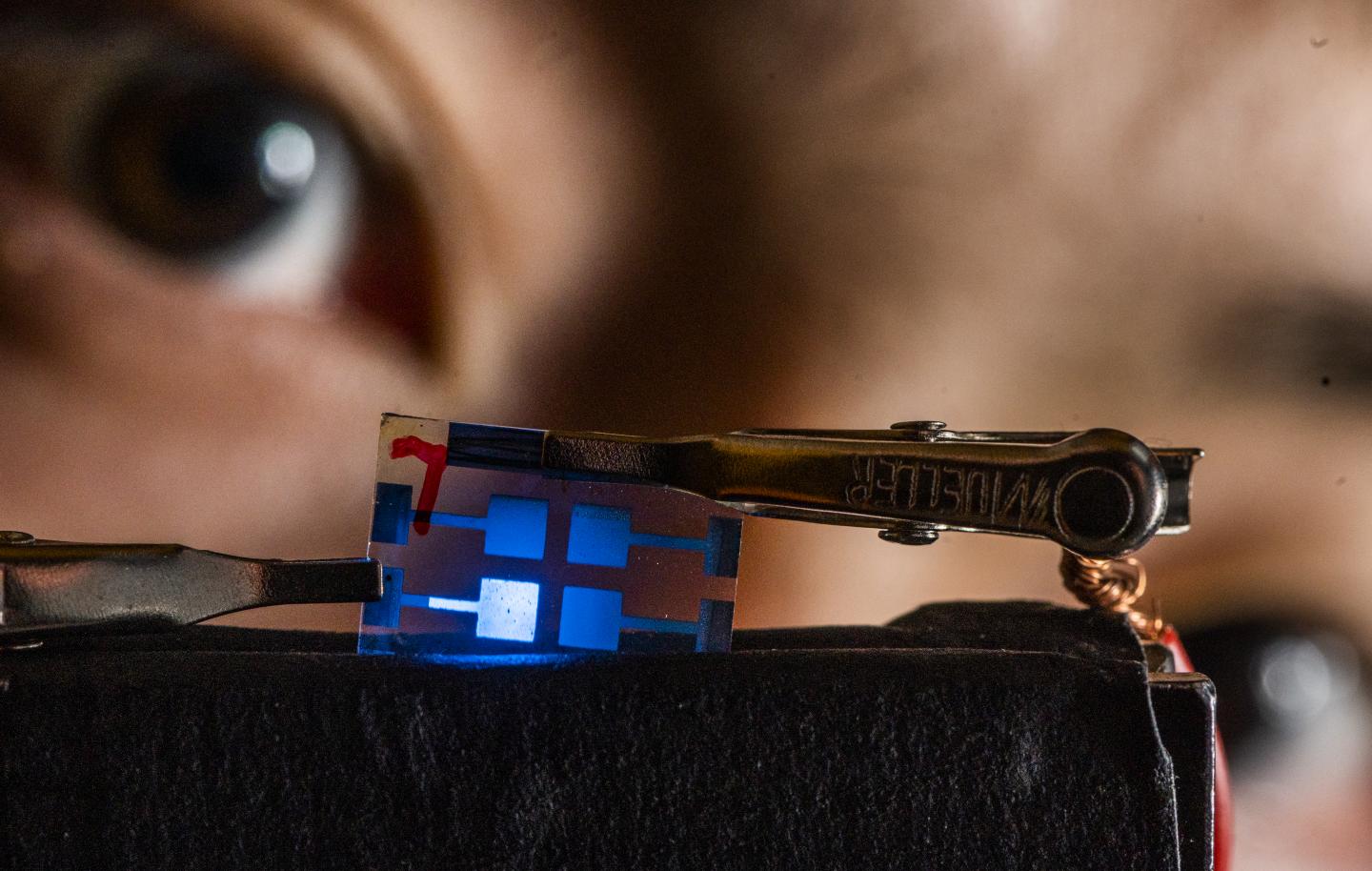 Illumination is responsible for approximately 20% of global electricity consumption, a figure that could be reduced to 5% if all light sources consisted of light-emitting diodes (LEDs). The blue-white LEDs currently in use, however, need complicated manufacturing methods and are expensive, which makes it more difficult to achieve a global transition.

LEDs manufactured from halide perovskites could be a cheaper and more eco-friendly alternative for both illumination and LED-based monitors. Perovskites are a family of semiconducting materials defined by their cubic crystal structure. They have good light-emitting properties and are easy to manufacture. Using elements from the halogen group, i.e. fluorine, chlorine, bromine and iodine, perovskites can be given properties that depend on the chemical composition of the crystal.

LEDs for green and red light have already been created with perovskites, but one colour, blue, has so far been lacking, making it impossible to achieve white light.

"Blue light is the key to bringing light-emitting perovskites to practical applications. Our most recent breakthrough is one step on the way", says Feng Gao, professor at the Department of Physics, Chemistry and Biology at Linköping University.

Feng Gao's research group, in collaboration with colleagues in Lund, Great Britain, Germany, China and Denmark, has managed to create halide perovskites that give stable emission in the wavelength range 451-490 nanometres - corresponding to deep blue to sky blue colours. Max Karlsson is doctoral student at Linköping University and joint first author of the article now published in Nature Communications. He says:

"Metal-halide perovskites are easily colour-tuneable over the whole visible spectrum by simple alloying. Unfortunately, they exhibit demixing and a blue LED turns green during operation. We have found a method that can prevent this colour shift by controlling the film crystallisation dynamics when creating the perovskite. These findings pave the way for stable perovskite alloys, not only for LEDs but also for solar cells."

The challenge of creating blue light in perovskites is that it requires a chemical composition with a large fraction of chloride, which makes the perovskite unstable. Blue perovskite-based LEDs have previously been created with using what is known as the "quantum confinement technique", which gives low-intensity LEDs with poor efficiency. However, stable perovskites with the desired amount of chloride can be created with the aid of the "vapour-assisted crystallisation technique". Furthermore, the Linköping University researchers have achieved an energy efficiency of up to 11% for the blue perovskite-based LEDs.

"We have shown that blue light-emitting diodes based on halide perovskites can be both efficient and stable across a broad spectrum, without using quantum confinement. We have managed to create one of the most efficient blue perovskite-based LEDs so far known", says Weidong Xu, postdoc at Linköping University.

The science of perovskites is a relatively new research field that has aroused major international interest, since it offers a great potential for developing cheap and efficient materials. Feng Gao, however, is quick to point out that the work they have done is basic research, and applications are still some way off in future.

"Perovskite LEDs are a young technology and have some way to go before they see the light of day. Currently, the short lifetime and poor performance of blue LEDs are the main obstacles for perovskite light-emitting diodes before they can start to compete with existing technologies such as light-emitting diodes based on organic and inorganic semiconductors. We will keep working on that to make PeLEDs comparable to the other technologies", says Feng Gao.