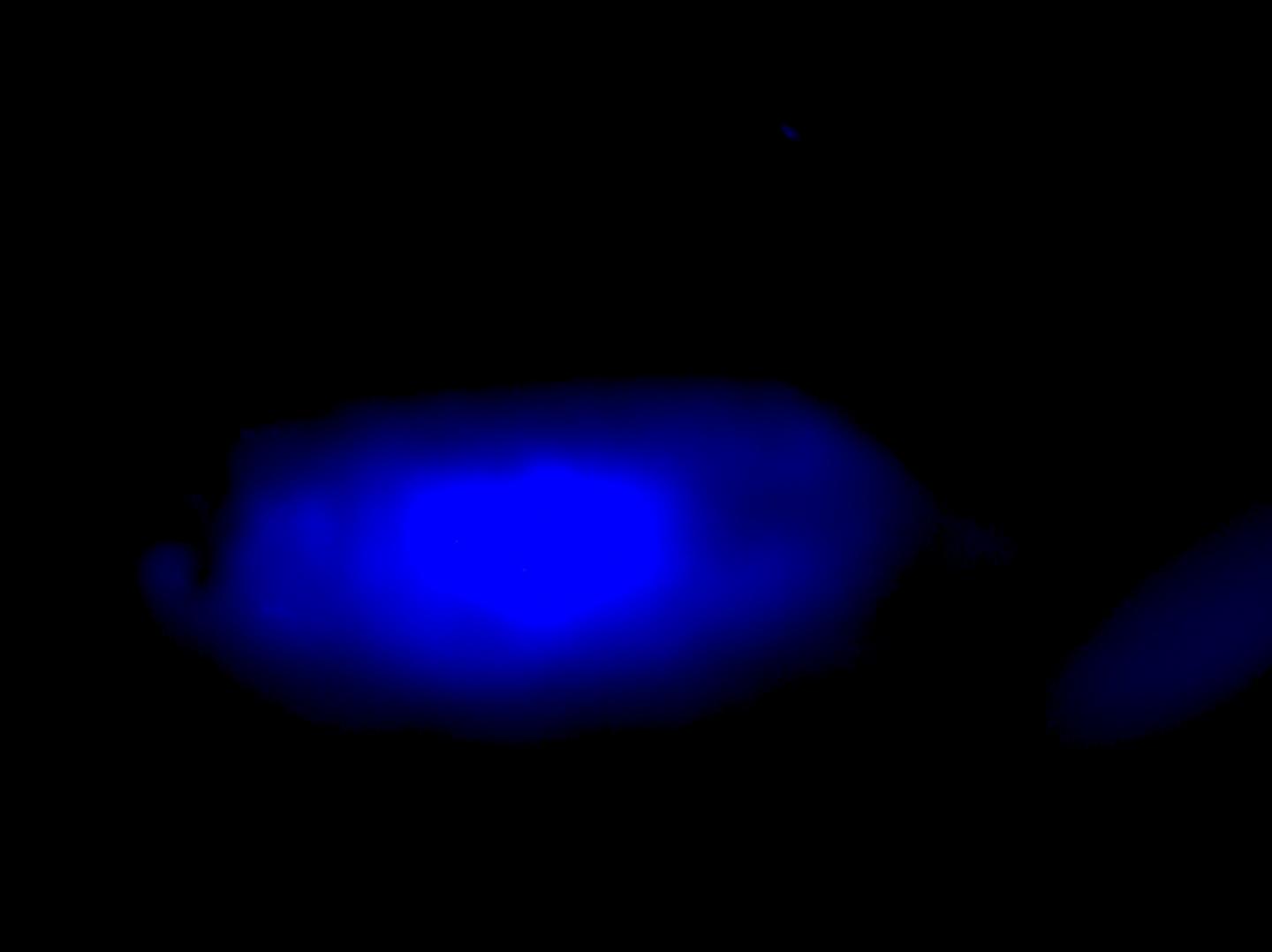 IMAGE: UC Berkeley chemists created a type of halide perovskite crystal that emits blue light, something that has been hard to achieve with this trendy new material. But the researchers discovered...

In the process, however, the researchers discovered a fundamental property of halide perovskites that may prove a barrier to their widespread use as solar cells and transistors.

Alternatively, this unique property may open up a whole new world for perovskites far beyond that of today's standard semiconductors.

In a paper appearing Jan. 24 in the journal Science Advances, UC Berkeley chemist Peidong Yang and his colleagues show that the crystal structure of the halide perovskites changes with temperature, humidity and the chemical environment, disrupting their optical and electronic properties. Without close control of the physical and chemical environment, perovskite devices are inherently unstable. This is not a major problem for traditional semiconductors.

"Some people may say this is a limitation. For me, this is a great opportunity," said Yang, the S. K. and Angela Chan Distinguished Chair in Energy in the College of Chemistry and director of the Kavli Energy NanoSciences Institute. "This is new physics: a new class of semiconductors that can be readily reconfigured, depending on what sort of environment you put them in. They could be a really good sensor, maybe a really good photoconductor, because they will be very sensitive in their response to light and chemicals."

Current semiconductors made of silicon or gallium nitride are very stable over a range of temperatures, primarily because their crystal structures are held together by strong covalent bonds. Halide perovskite crystals are held together by weaker ionic bonds, like those in a salt crystal. This means they're easier to make -- they can be evaporated out of a simple solution -- but also susceptible to humidity, heat and other environmental conditions.

"This paper is not just about showing off that we made this blue LED," said Yang, who is a senior faculty scientist at Lawrence Berkeley National Laboratory (Berkeley Lab) and a UC Berkeley professor of materials science and engineering. "We are also telling people that we really need to pay attention to the structural evolution of perovskites during the device operation, any time you drive these perovskites with an electrical current, whether it is an LED, a solar cell or a transistor. This is an intrinsic property of this new class of semiconductor and affects any potential optoelectronic device in the future using this class of material."

Making semiconductor diodes that emit blue light has always been a challenge, Yang said. The 2014 Nobel Prize for Physics was awarded for the breakthrough creation of efficient blue light-emitting diodes from gallium nitride. Diodes, which emit light when an electric current flows through them, are optoelectronic components in fiber optic circuits as well as general purpose LED lights.

Since halide perovskites first drew wide attention in 2009, when Japanese scientists discovered that they make highly efficient solar cells, these easily made, inexpensive crystals have excited researchers. So far, red- and green-emitting diodes have been demonstrated, but not blue. Halide perovskite blue-emitting diodes have been unstable -- that is, their color shifts to longer, redder wavelengths with use.

As Yang and his colleagues discovered, this is due to the unique nature of perovskites' crystal structure. Halide perovskites are composed of a metal, such as lead or tin, equal numbers of larger atoms, such as cesium, and three times the number of halide atoms, such as chlorine, bromine or iodine.

When these elements are mixed together in solution and then dried, the atoms assemble into a crystal, just as salt crystalizes from sea water. Using a new technique and the ingredients cesium, lead and bromine, the UC Berkeley and Berkeley Lab chemists created perovskite crystals that emit blue light and then bombarded them with X-rays at the Stanford Linear Accelerator Center (SLAC) to determine their crystalline structure at various temperatures. They found that, when heated from room temperature (about 300 Kelvin) to around 450 Kelvin, a common operating temperature for semiconductors, the crystal's squashed structure expanded and eventually sprang into a new orthorhombic or tetragonal configuration.

Since the light emitted by these crystals depends on the arrangement of and distances between atoms, the color changed with temperature, as well. A perovskite crystal that emitted blue light (450 nanometers wavelength) at 300 Kelvin suddenly emitted blue-green light at 450 Kelvin.

According to Yang, blue-emitting perovskite diodes have been hard to create because the standard technique of growing the crystals as a thin film encourages formation of mixed crystal structures, each of which emits at a different wavelength. Electrons get funneled down to those crystals with the smallest bandgap -- that is, the smallest range of unallowed energies -- before emitting light, which tends to be red.

To avoid this, Yang's postdoctoral fellows and co-first authors -- Hong Chen, Jia Lin and Joohoon Kang -- grew single, layered crystals of perovskite and, adapting a low-tech method for creating graphene, used tape to peel off a single layer of uniform perovskite. When incorporated into a circuit and zapped with electricity, the perovskite glowed blue. The actual blue wavelength varied with the number of layers of octahedral perovskite crystals, which are separated from one another by a layer of organic molecules that allows easy separation of perovskite layers and also protects the surface.

Nevertheless, the SLAC experiments showed that the blue-emitting perovskites changed their emission colors with temperature. This property can have interesting applications, Yang said. Two years ago, he demonstrated a window made of halide perovskite that becomes dark in the sun and transparent when the sun goes down and also produces photovoltaic energy.

"We need to think in different ways of using this class of semiconductor," he said. "We should not put halide perovskites into the same application environment as a traditional covalent semiconductor, like silicon. We need to realize that this class of material has intrinsic structural properties that make it ready to reconfigure. We should utilize that."