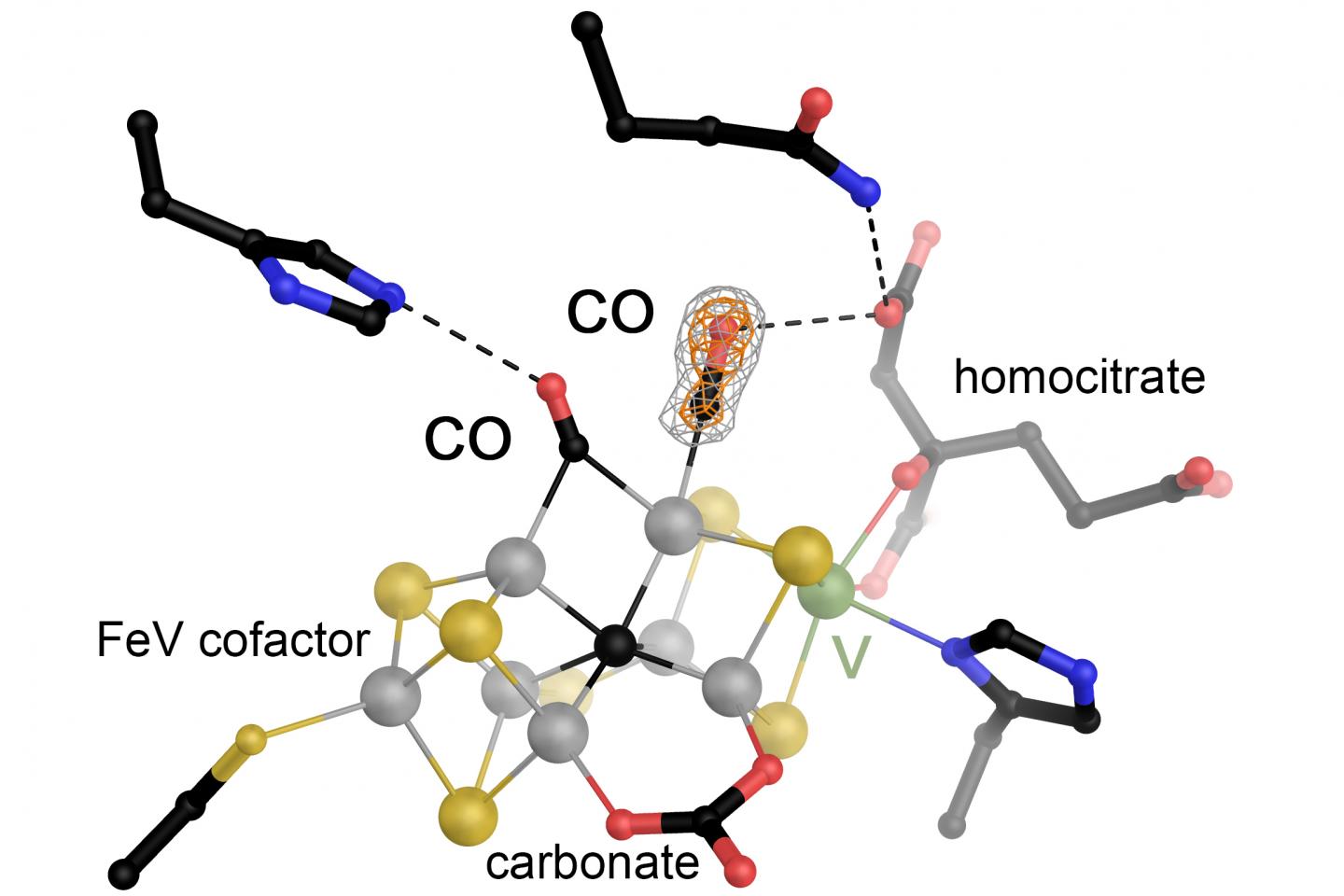 IMAGE: The iron-vanadium (FeV) cofactor in vanadium-dependent nitrogenase was made to react with carbon monoxide (CO) and then gassed under pressure, allowing two molecules of the substrate to be visualized in...

Through the biological fixation of the element nitrogen by the enzyme nitrogenase, organisms gain access to molecular nitrogen (N2) in the Earth's atmosphere, which is essential for building cellular structures. In addition, a vanadium-dependent variant of nitrogenase can reduce the toxic gas carbon monoxide (CO) to hydrocarbons. These reductions of N2 and CO are among the most important processes in industrial chemistry, as they are used to produce both fertilizers and synthetic fuels. However, researchers have not yet been able to decipher the different pathways of the two reactions. Dr. Michael Rohde from Prof. Dr. Oliver Einsle's team at the Institute of Biochemistry at the University of Freiburg, in collaboration with two research groups at Freie Universität Berlin, has now been able to show how the active site of the vanadium-dependent nitrogenase is able to bind two CO molecules simultaneously, thereby creating the basis for combining the spatially adjacent carbon atoms of both molecules in a reductive process. The researchers recently presented their results in the journal Science Advances.

The industrial reductions of N2 and CO - known as the Haber-Bosch and Fischer-Tropsch processes, respectively - require high temperatures and pressure. While N2 reduction leads to the bioavailable product ammonium (NH4+), at least two carbon atoms combine during the conversion of CO. The predominant reaction product is ethylene (ethene, C2H4), a colorless gas that plays an important role not only in fuels but also in the production of plastics. Although the cleavage of an N-N bond in nitrogen fixation is chemically quite fundamentally different from the formation of a C-C bond in CO reduction, scientists previously suspected that nitrogenase uses the same basic mechanistic principles for both reactions.

In a previous work, the team led by Rohde and Einsle used nitrogenase to react with CO gas, resulting in the specific binding of a single molecule. In their current study, which builds on this work, the researchers show that they gassed crystals of this first state with CO under pressure and then subjected them to X-ray crystallographic analysis. This allowed them to directly observe how a second CO molecule binds. "The form of nitrogenase obtained in this way, with two CO molecules at the active site, probably represents a blocked state," Rohde explains, "but it provides direct clues to the mechanism of the enzyme." As a result, Einsle's team can now outline a detailed mechanism of CO reduction through nitrogenase.