The behavior of therapeutic antibodies in immunotherapy 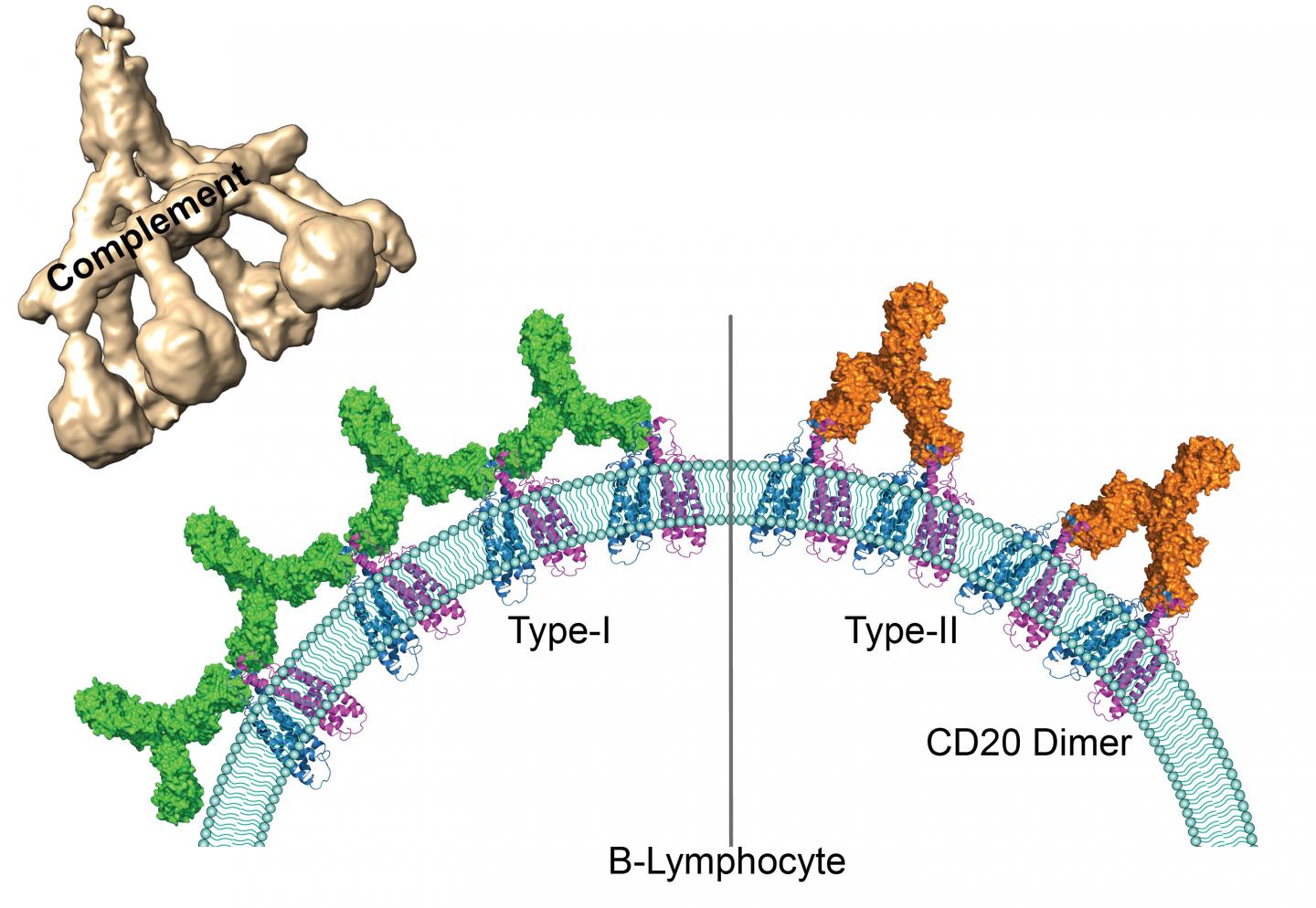 IMAGE: Human antigen CD20 molecules (blue and pink) expressed on the surface of B cells are recognised by type 1 (green), and type 2 (orange) therapeutic antibodies. Only type 1 antibodies...

Since the late 1990s, immunotherapy has been the frontline treatment against lymphomas where synthetic antibodies are used to stop the proliferation of cancerous white blood cells. However, in the more than 20 years since their use began, the molecular mechanisms that underlie this therapy are still little understood. For the first time, scientists from the CNRS, Institut Pasteur and Université de Bordeaux have observed the interaction between therapeutic antibodies and their target protein. The research, published in Science on 14 August 2020, describes these molecular mechanisms and opens the way to the development of new treatments.

Non-Hodgkin lymphomas are among the most common cancers affecting almost 1.5 million people globally. They cause uncontrolled proliferation of B lymphocytes, a type of white blood cell, to the detriment of healthy cells. Since the end of the 1990s, immunotherapy had been a frontline treatment using synthetic antibodies to target a protein on the surface of B lymphocytes called CD20. The body's defences then identify these cells covered in antibodies as pathogens and destroy them.

Presently, the types of therapeutic antibodies used are classified into two groups according to how many CD20 molecules they bind to and the immunity response they trigger. Antibodies from the first group have the ability to interact with twice as many CD20 molecules than antibodies from the second group and can set off a cascading immune response called a "complement pathway". Until now, the molecular mechanisms at the root of underlying the differences between these two groups were unknown.

By using cryogenic electron microscopy, scientists from the CNRS, Institut Pasteur, and Université de Bordeaux1 were able, for the first time, to observe on an atomic level the interaction between the representatives of both groups of antibodies and their target molecules. They have shown that because of the availability of space, CD20 proteins can bind to two type 1 antibodies but to only one type 2 antibody. Due to their larger numbers on the surface of B lymphocytes, type 1 antibodies can form clusters. The team demonstrates that these clusters trigger the complement pathway which leads to the destruction of the target B lymphocytes. Type 2 antibodies, on the other hand, are thinly dispersed on the cell surface and therefore do not trigger a cascading response. Other independent immune responses are still able to destroy the cells.

Never before has the mechanism of action of therapeutic antibodies been described with such precision. This research could lead to new synthetic antibodies able to control a patient's immune response. In addition, this description of the mechanism activating the complement pathway opens the way to new research possibilities aiming at an understanding of how immune defences work.