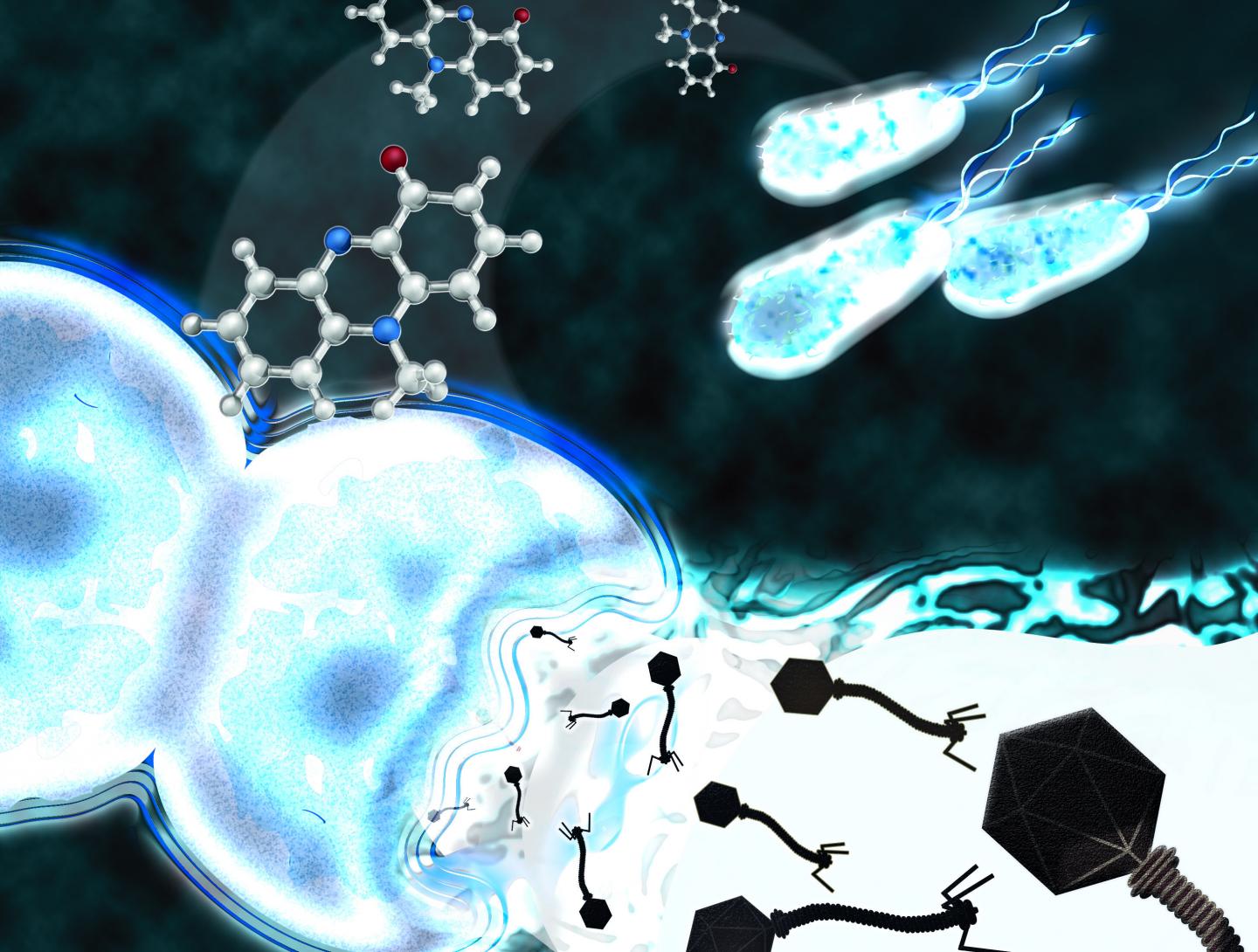 IMAGE: As virus particles, phages infect bacteria in order to ensure their own progress.

This targeted control of phages provides entirely new biotechnological and therapeutic approaches, e.g. for phage therapies. The results produced in the context of an ERC grant have been published in the Journal of the American Chemical Society.

The human body and its microbiota harbour a large amount of phages. These infect bacteria as virus particles to ensure their own survival. One of their strategies is to integrate into the bacterial genome and multiply via bacterial cell division. However, external signal molecules can trigger the phages' sudden awakening from their dormant stage. Once activated, they destroy their host, the bacterium, and thus release their newly produced viral particles. With a prestigious ERC Consolidator Grant of the European Research Council, Thomas Böttcher investigates the switch from the sleeping (lysogenic) to the activated (lytic) lifestyle of phages.

"We already know that phages decisively influence the population dynamics of bacteria and that microorganisms compete by using chemical weapons," says Thomas Böttcher, Professor of Microbial Biochemistry of the Faculty of Chemistry and the Centre of Microbiology and Environmental Systems Science. "We now wanted to investigate whether, in the complex microbial ecosystems, there are also microbes that specifically activate phages in order to use them against their competitors."

Indeed, the researchers could show that the bacterium Pseudomonas aeruginosa produces large amounts of a signal molecule that triggers the conversion of a phage, residing in a strain of the species Staphylococcus aureus, from a quiet companion into a deadly parasite.

"We were completely surprised to find that the chemical compound pyocyanin, which we were able to isolate and synthesise, only specifically activated one of several phages of Staphylococcus aureus. Pyocyanin is therefore a highly selective agent," says co-author Magdalena Jancheva.

The drug mitomycin C induces DNA damage in bacterial cells and causes phages to leave their dying host, but according to Thomas Böttcher, "it activates all phages in the bacteria in a non-selective manner". The researchers also observed that pyocyanin releases even more phages in Staphylococcus aureus than mitomycin C, pyocyanin therefore had an "remarkably strong effect".

The bacterial species Pseudomonas aeruginosa and Staphylococcus aureus occupy the same ecological niche in the human body. As pathogens, they frequently occur in the lungs of patients with cystic fibrosis, a congenital metabolic disease. Staphylococcus bacteria dominate at a young age, while Pseudomonas bacteria become more prevalent with increasing age.

"Certain signaling molecules could make it possible to combat pathogens via phage activation - they could thus be used to initiate internal phage therapy," Thomas Böttcher states. At the same time, the phages' molecular switches, which selectively trigger the production of viral particles through a signaling molecule such as pyocyanin, could also serve as a new tool for biotechnology or synthetic biology. "Our findings open up a wide field in which we want to move forward", the researchers conclude.