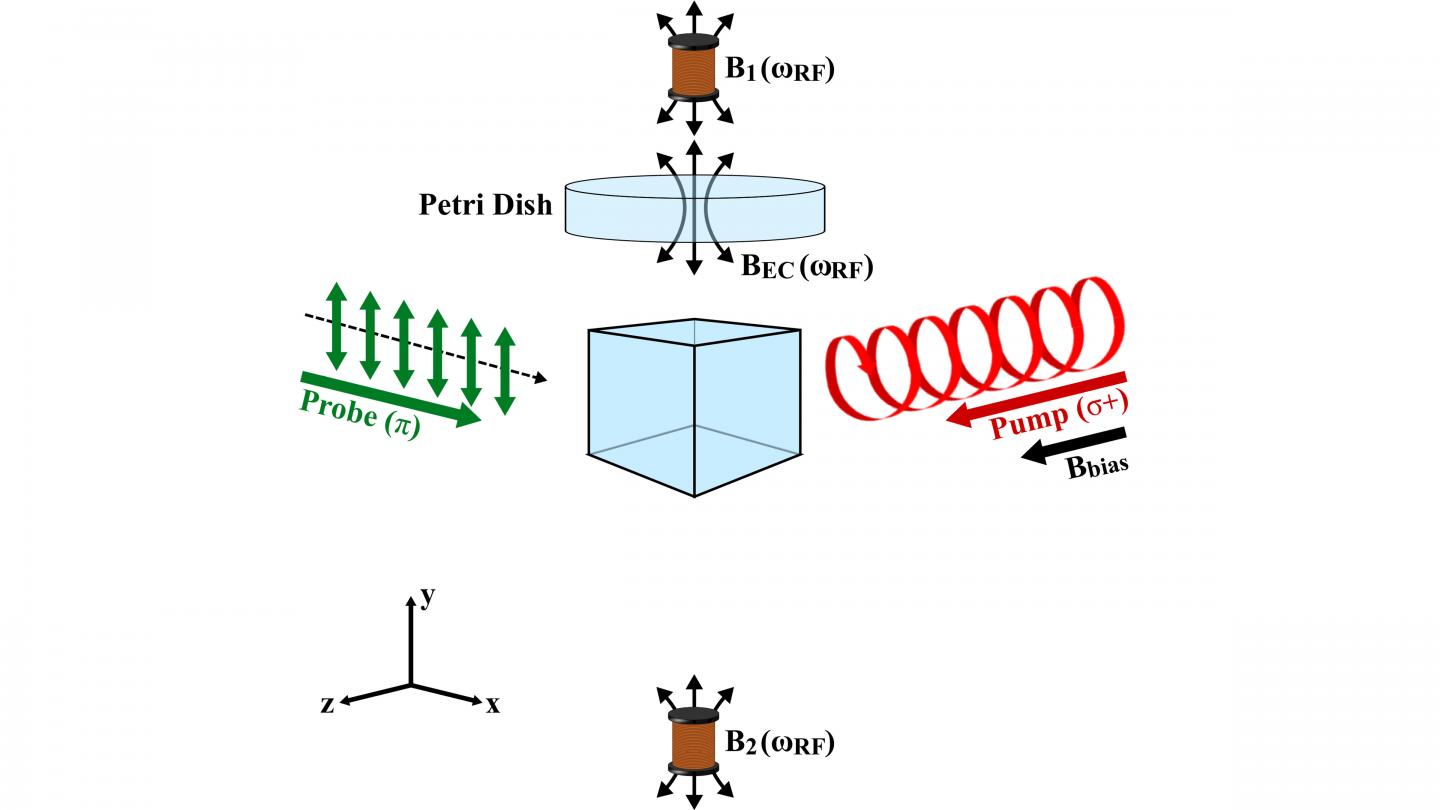 IMAGE: A pair of coils induces a magnetic field response (labeled BEC) in a low-conductivity solution contained in a petri dish, detected by a radio-frequency atomic magnetometer, based on laser manipulation...

WASHINGTON, March 31, 2020 -- Mapping the electrical conductivity of the human heart would be a valuable tool in the diagnosis and management of diseases, such as atrial fibrillation. But doing so would require invasive procedures, none of which are capable of directly mapping dielectric properties.

Significant advances have been made recently that leverage atomic magnetometers, which are quantum devices, to provide a direct picture of electric conductivity of biological tissues. In this week's Applied Physics Letters, from AIP Publishing, new work in quantum sensors points to ways such technology could be used to examine the heart.

Researchers at University College London have modified approaches used in electromagnetic induction imaging to take a picture of the electrical conduction of models that resembles the human heart. Using a radio-frequency atomic magnetometer that relies on rubidium-87, the group achieved the level of performance required to image the dielectric properties of the supporting structures that drive cardiac function.

"For the first time, we have achieved, in unshielded environments, the sensitivity and stability for imaging low conductivity in small volumes that are comparable to the expected size of the anomalies seen in atrial fibrillation," said author Luca Marmugi. "Thus, we have demonstrated that noninvasive electromagnetic induction imaging of the heart is technically possible."

The device the UCL group has developed applies a small oscillating magnetic field that induces a signal in the heart and is detected by an ultrasensitive detector based on laser manipulation of atomic spins.

To map conductivity anomalies in the human heart, such a device would need to detect conductivities on the order of 0.7 to 0.9 siemens per meter. When tested on laboratory solutions of the same conduction features of the human heart, the group's device was able to yield a signal that small.

The results mark a fiftyfold improvement over previous attempts to capture such small specimens.

Marmugi said the group hopes to continue developing its magnetometer system for clinical use and looks to improve on machine learning techniques to better map heart conductivity data.

"Our work has demonstrated the feasibility of our idea proposed in 2016. Mission accomplished!" Marmugi said. "However, we know we cannot rest. In this sense, I hope it will trigger increased interested in this kind of applications, hopefully encouraging more and more groups to work in the same field and fostering new collaboration and ideas."