Astronomers have used powerful adaptive optics technology at the W. M. Keck Observatory in Hawai‘i to reveal the precise locations and environments of a pair of supermassive black holes at the center of an ongoing collision between two galaxies 300 million light-years away.

The new observations of the galaxy merger known as NGC 6240 reveal that each of the black holes resides at the center of a rotating disk of stars and is surrounded by a cloud of young star clusters formed in the merger. 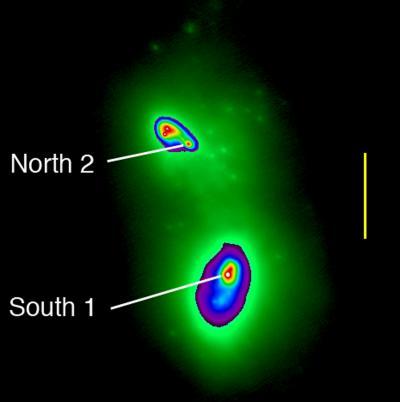 An adaptive optics image of the double nucleus of the galaxy merger NGC 6240, taken in infrared light with the Keck II Telescope. The feature within the north nucleus labeled "North 2" is at the position of the northern supermassive black hole. The southern supermassive black hole is located just north (above) the feature labeled "South 1" in the south nucleus. The yellow vertical line represents one second of arc, or 490 parsecs at the distance of NGC 6240. Credit: C. Max, G. Canalizo, and W. de Vries

"The study of the interplay between galaxy mergers, star formation, and activity from accreting black holes is crucial to our understanding of how the universe evolved to the galaxies and structures we see today," said Canalizo, an assistant professor of physics in UCR’s Institute of Geophysics and Planetary Physics.

Canalizo, the second author of the research paper, worked with Claire E. Max, the paper’s lead author, as a postdoctoral researcher at Lawrence Livermore National Laboratory (LLNL) from 2000 to 2003. Willem H. de Vries, a physicist at LLNL and UC Davis, is also a coauthor.

"NGC 6240 is a system of a pair of galaxies caught in the act of merging," said Canalizo, who is also a faculty member in the Department of Physics and Astronomy at UCR. "It presents an ideal lab for study and for testing our current models of galaxy evolution. It exhibits not only accreting black holes, also called active galactic nuclei, but also prodigious star formation, and a galaxy merger in progress. Moreover, the two black holes are in the process of merging and the system is very close to us, making it easier to observe in detail. At about 300 million light years away, NGC 6240 might as well be in our backyard, compared to the majority of active nuclei in the universe."

Previous studies had already discovered the presence of the two active galactic nuclei. "People had observed this pair of colliding galaxies at different wavelengths and seen what they thought were the black holes, but it's been very hard to make sense of how the observations at various wavelengths correspond to each other," said Max, a professor of astronomy and astrophysics at UC Santa Cruz and the director of its Center for Adaptive Optics. "The adaptive optics results enabled us to tie it all together, so now we can really see it all – the hot dust in the infrared, the stars in the visible and infrared, and the X-rays and radio emissions coming from right around the black holes."

Adaptive optics (AO) is a system comprised of telescopes, computers and deformable mirrors. It enables astronomers to counteract the blurring effects of turbulence in Earth's atmosphere, which degrades images seen by ground-based telescopes. 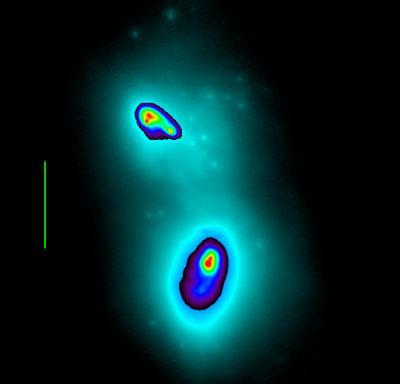 NGC 6240 is an ongoing collision of two gas-rich disk galaxies. Using adaptive optics at the Keck II Telescope, University of California researchers have resolved young star clusters formed because of the merger (small blue dots), and have identified which features within the twin nuclei are associated with the two supermassive black holes known to inhabit the nuclear regions. In this image taken in infrared light, the nucleus from each of the two galaxies is shown using a color scheme that emphasizes the detail within the nuclei. The green vertical line represents one second of arc, or 1600 light years at the distance of NGC 6240. Credit: C. Max, G. Canalizo, and W. de Vries

"Using AO, we were able to pinpoint the exact location of the active nuclei within the two galaxies," Canalizo said. "This will allow us, for the first time in this system, to study and model the interaction between the accreting black holes and the star formation around them. It turn, this will give us clues to how galaxies assemble from smaller units to the galaxies we see today."

Images of NGC 6240 in visible light from the Hubble Space Telescope show the outer parts of the colliding galaxies distorted by their ongoing merger into long tidal tails of stars, gas, and dust. In the bright central region, two distinct nuclei can be discerned, but clouds of dust obscure much of the visible light from the core. The presence of two supermassive black holes in NGC 6240 was first demonstrated by X-ray observations from NASA's Chandra X-ray Observatory in 2002. Two point-like radio sources were also detected in the central region.

According to the research team, the two black holes in NGC 6240 will eventually, in 10 million to 100 million years, spiral into each other and merge, producing a powerful burst of gravitational radiation.

Canalizo, who was in charge of planning and making the AO observations at the 10-meter Keck II Telescope, processed the near-infrared data for the team. De Vries made precise measurements of the positions of astronomical objects in the sky, allowing the researchers to match up their near-infrared images with the data at other wavelengths.