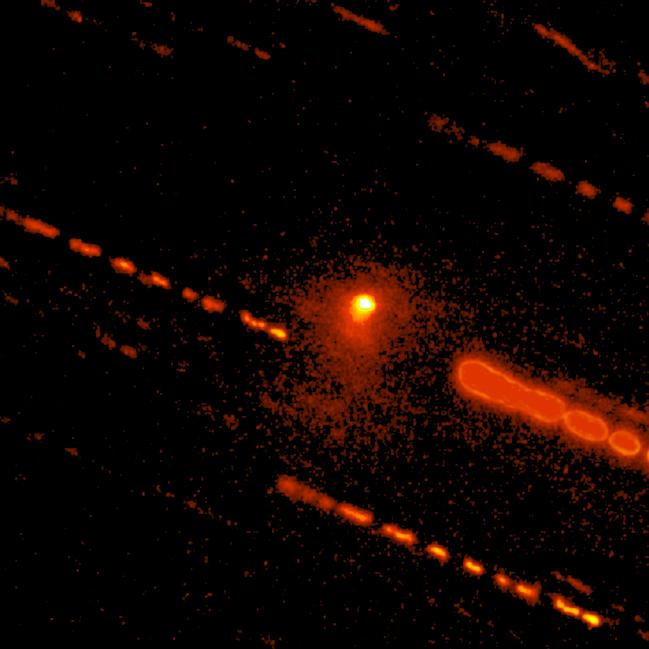 IMAGE: This new image of C/2014 OG392 (PANSTARRS) and its extensive coma combines many digital images into a single 7,700 second exposure. The dashed lines are star trails caused by the...

Centaurs are minor planets believed to have originated in the Kuiper Belt in the outer solar system. They sometimes have comet-like features such as tails and comae--clouds of dust particles and gas--even though they orbit in a region between Jupiter and Neptune where it is too cold for water to readily sublimate, or transition, directly from a solid to a gas.

Only 18 active Centaurs have been discovered since 1927, and much about them is still poorly understood. Discovering activity on Centaurs is also observationally challenging because they are faint, telescope time-intensive and because they are rare.

The team's research involved developing a database search algorithm to locate archival images of the Centaur as well as a follow-up observational campaign.

"Our paper reports the discovery of activity emanating from Centaur 2014 OG392, based on archival images we uncovered," Chandler said, "plus our own new observational evidence acquired with the Dark Energy Camera at the Inter-American Observatory in Cerro Tololo, Chile, the Walter Baade Telescope at the Las Campanas Observatory in Chile and the Large Monolithic Imager at Lowell Observatory's Discovery Channel Telescope in Happy Jack, Ariz."

"We detected a coma as far as 400,000 km from 2014 OG392," he said, "and our analysis of sublimation processes and dynamical lifetime suggest carbon dioxide and/or ammonia are the most likely candidates for causing activity on this and other active Centaurs."

"We developed a novel technique," Chandler said, "that combines observational measurements, for example, color and dust mass, with modeling efforts to estimate such characteristics as the object's volatile sublimation and orbital dynamics."

As a result of the team's discovery, the Centaur has recently been reclassified as a comet, and will be known as "C/2014 OG392 (PANSTARRS)."

"I'm very excited that the Minor Planet Center awarded a new comet designation befitting the activity we discovered on this unusual object," he said.

This week, Chandler has been invited to present the results at the 52nd Division for Planetary Sciences (DPS) of the American Astronomical Society (AAS) 2020 meeting.