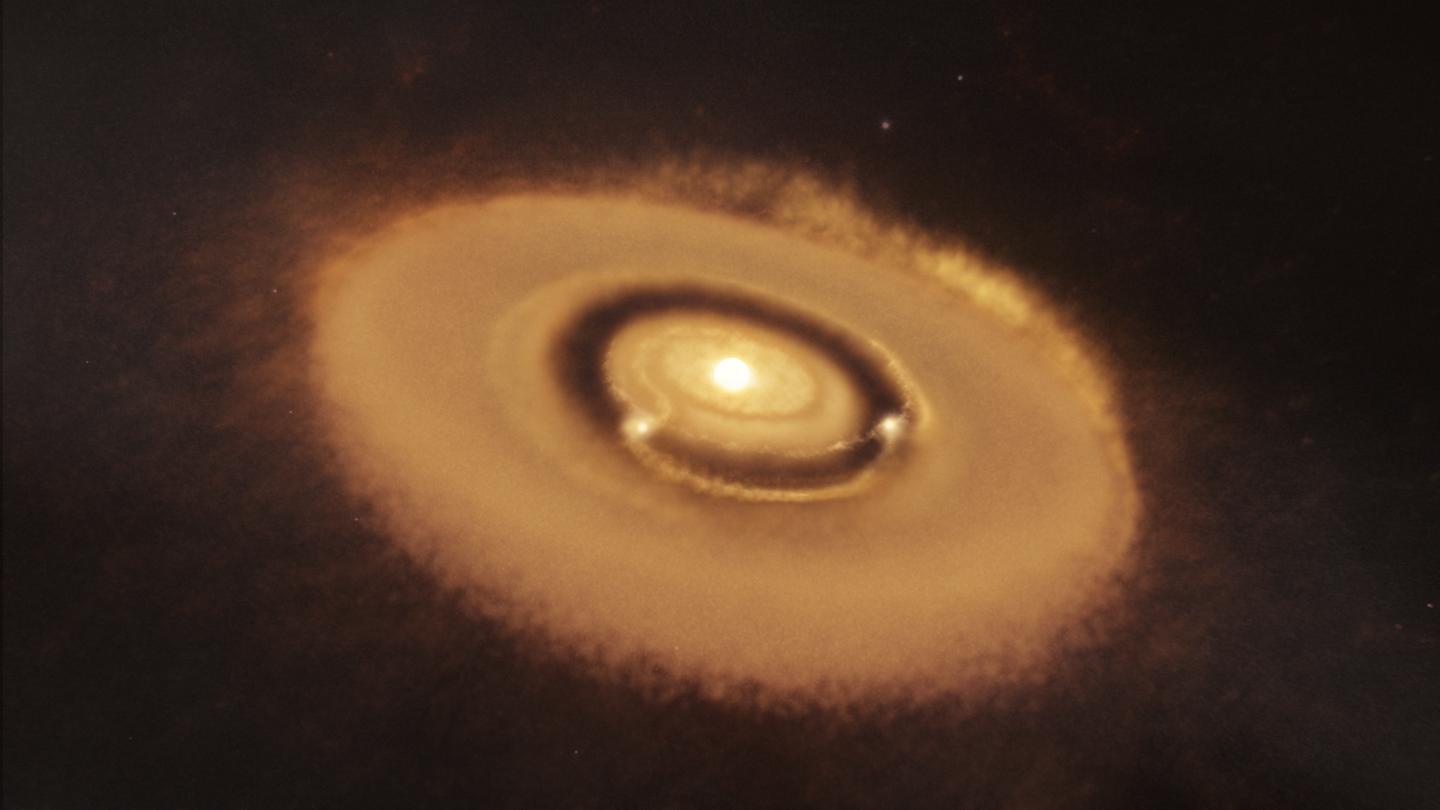 IMAGE: Artist's impression of the PDS 70 system. The two planets are seen clearing a gap in the protoplanetary disk from which they were born. The planets are heated by infalling...

Maunakea, Hawaii - New evidence shows the first-ever pictures capturing the birth of a pair of planets orbiting the star PDS 70 are in fact authentic.

Using a new infrared pyramid wavefront sensor for adaptive optics (AO) correction at W. M. Keck Observatory on Maunakea in Hawaii, a Caltech-led team of astronomers applied a new method of taking family photos of the baby planets, or protoplanets, and confirmed their existence.

The team's results are published in today's issue of The Astronomical Journal.

PDS 70 is the first known multiplanetary system where astronomers can witness planet formation in action. The first direct image of one of its planets, PDS 70b, was taken in 2018 followed by multiple images taken at different wavelengths of its sibling, PDS 70c, in 2019. Both Jupiter-like protoplanets were discovered by the European Southern Observatory's Very Large Telescope (VLT).

"There was some confusion when the two protoplanets were first imaged," said Jason Wang, a Heising-Simons Foundation 51 Pegasi b Fellow at Caltech and lead author of the study. "Planet embryos form from a disk of dust and gas surrounding a newborn star. This circumstellar material accretes onto the protoplanet, creating a kind of smokescreen that makes it difficult to differentiate the dusty, gaseous disk from the developing planet in an image."

To help provide clarity, Wang and his team developed a method to disentangle the image signals from the circumstellar disk and the protoplanets.

"We know the disk's shape should be a symmetrical ring around the star whereas a planet should be a single point in the image," said Wang. "So even if a planet appears to sit on top of the disk, which is the case with PDS 70c, based on our knowledge of how the disk looks throughout the whole image, we can infer how bright the disk should be at the location of the protoplanet and remove the disk signal. All that's left over is the planet's emission."

The team snapped images of PDS 70 with the Near-Infrared Camera (NIRC2) on the Keck II telescope, marking first science for a vortex coronagraph installed in NIRC2 as part of a recent upgrade, combined with the Observatory's upgraded AO system consisting of a new infrared pyramid wavefront sensor and real-time control computer.

"The new infrared detector technology used in our pyramid wavefront sensor has dramatically improved our ability to study exoplanets, especially those around low-mass stars where planet formation is actively occurring," said Sylvain Cetre, software engineer at Keck Observatory and one of the lead developers of the AO upgrade. "It will also allow us to improve the quality of our AO correction for harder to image targets like the center of our galaxy."

This project benefited from the innovative infrared sensor that measures distortions in light caused by the Earth's atmosphere.

"New technology is a science multiplier," says Peter Kurczynski, Program Director at the National Science Foundation, which contributed funding to this project. "It enables investigations that were never before possible."

"The PDS 70 imagery Jason's team captured was among the first tests of the scientific quality produced by Keck's pyramid wavefront sensor," said AO scientist Charlotte Bond, who played a key role in the design and installation of the technology. "It's exciting to see just how precise the new AO system corrects for the atmospheric turbulence of dusty objects like the young stars where protoplanets are expected to reside, allowing for the clearest, sharpest view of baby versions of our solar system."