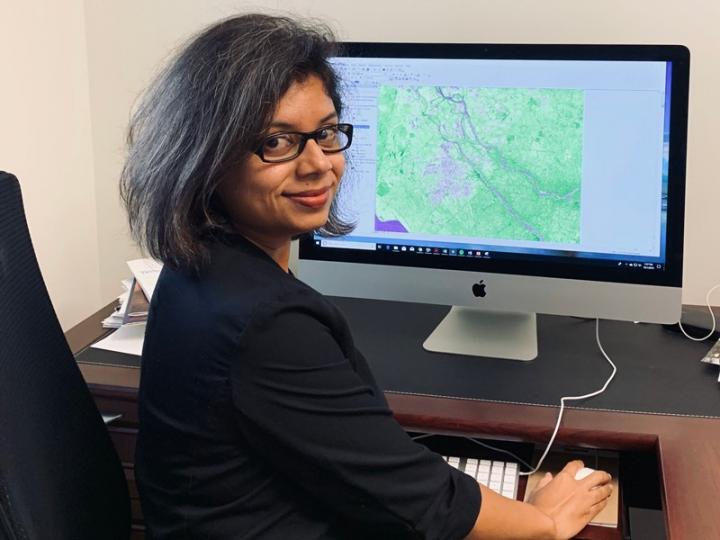 IMAGE: University of Delaware assistant professor Pinki Mondal recently had a paper published in the Remote Sensing of Environment Journal that shows the importance of using finer scale satellite data in...

While using large swaths of coarse satellite data can be an effective tool for evaluating forests on a national scale, the resolution of that data is not always well suited to indicate whether or not those forests are growing or degrading.

A new study led by the University of Delaware's Pinki Mondal recommends that in addition to using this broad scale approach, it is important for countries to prioritize areas such as national parks and wildlife refuges and use finer scale data in those protected areas to make sure that they are maintaining their health and are being reported on accurately.

The work was conducted to develop a reporting framework that can help the countries with their Sustainable Development Goal (SDG) reporting to the United Nations.

In 2015, the United Nations General Assembly set forth 17 SDGs to serve as a blueprint to achieve a better and more sustainable future for all, with the hope to achieve these goals by the year 2030. Among these, goal No. 15 -- Life on Land -- is to protect the world's forests to strengthen natural resource management and increase land productivity. To help with reporting SDG 15, Mondal and her research group have been using remote sensing to look at forests around the world.

Mondal, an assistant professor in the Department of Geography and Spatial Sciences in UD's College of Earth, Ocean and Environment, recently had a paper published in the Remote Sensing of Environment Journal looking at SDG 15.

Most countries, especially the ones with limited access to computing resources and finer scale remote sensing data, use freely available remote sensing assets such as those from coarse-scale satellite sensors.

"Depending on the scale of a study, people tend to use coarser resolution data because generally, those satellite images have a larger footprint," said Mondal. "Only a few satellite images can cover an entire country and it's easier to use or analyze that kind of data."

The researchers used a broad-brush approach with coarser resolution satellite data to calculate vegetation trends in response to rainfall changes in the six countries.

While the coarse-resolution data could indicate an overall greening trend for an area, when they looked at two specific protected areas using finer scale data, they found that there was a lot more going on.

Using finer-resolution satellite data, the researchers looked at intact versus non-intact forests that were located in two protected areas, the Sanjay National Park in India and the Ruhuna National Park in Sri Lanka. Since both test cases are national parks, they are expected to host mostly intact, or undisturbed forests that would not be impacted by human populations.

"Protected areas are supposed to host and maintain quality forest. But by using this finer scale data, we were able to see non-intact forests that could be a result of factors such as fire, disease, or human activities. If we cannot maintain a healthy forest even within protected areas, then that's a problem," said Mondal.

When using a broad-brush approach, the Sanjay National Park showed an overall greening trend but when using the more in-depth data, they found almost one-third of the Sanjay National Park to have non-intact forest. In addition, they were also able to identify spots in the national parks that had no forests at all. Maintaining the balance between healthy forests and other ecosystems such as grasslands within these protected areas and minimizing degradation should be high priority for land managers moving forward.

This finer scale data allowed the researchers to generate maps of 87 percent and 91 percent overall accuracy for the Indian and Sri Lankan protected areas.

Mondal said one of the challenges facing researchers has been developing a broad definition for a forest, as depending on a country's ecosystem, their forests can be very different.

"If you work in a country like India, it's so diverse that by definition, you can't have one uniform forest," said Mondal. "In the land change science community, we have been debating the definition for a forest, but an acceptable measure is the one with 10 percent canopy cover."

This indicator of a forest can be tracked with satellites, and researchers use satellite images over time to measure how much of a particular mapping unit is covered by forest canopy.

"If you're working in a country with a diverse landscape, the status of forest cover might change pretty rapidly over time. But you cannot capture that change with this coarse-level, broad-brush input approach, which is what most of the national level studies use," said Mondal.

Overall, Mondal said that the goal of the paper was to encourage people to realize that there is not a one-size-fits-all approach to monitoring and reporting progress toward SDG.

"Our goal is to encourage landscape managers to think more deeply about the methods they are using in terms of reporting these SDGs because depending on what data you're using, your result might look completely different than what you're reporting at the U.N. level," said Mondal.