Are sinking soils in the Everglades related to climate change? 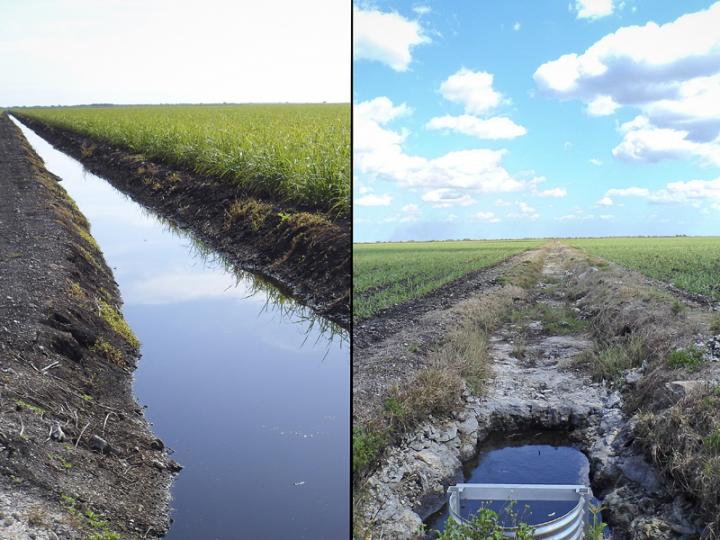 Characterized by alligators, airboats and catfish, the Everglades is a region of swampy wetlands in southern Florida. In addition to the area's role in Florida's tourism industry, the Everglades play a significant part in protecting our environment - through carbon sequestration.

The farmland was created by draining the Everglades, starting over 100 years ago. There are four main canals that drain the area. Farmers also have systems of ditches to manage the water levels in their fields and to provide irrigation to crops.

Since the 1950s, scientists have been studying an environmental change in the Everglades, called soil subsidence. Soil subsidence is the sinking or settling of the earth's surface. Researchers estimate a subsidence rate of about 1 inch per year.

Soil subsidence is a growing problem. In recent years, soils around the Everglades are so shallow that farmers are struggling to manage water and grow crops.

Previously, it was not clear if carbon quality played a role in soil subsidence. So, Andres Rodriguez, a researcher at University of Florida, was ready to find out. Ultimately, Rodriguez and his team want to improve soil conservation and explore different water management strategies. This research is important to protect the Everglades Agricultural Area, which plays a large role in Florida's agriculture economy.

Carbon sequestration is a process where carbon from the atmosphere is stored in the soil, which helps lessen global warming. Plants, ocean, and the soil all capture and store carbon.

The soil of the Everglades, called peat, is largely made up of waterlogged, decomposing plant and animal materials. The peat soil stores a large amount of carbon compared to other soils across the globe.

When the Everglades Agricultural Area was drained, the soil was exposed to higher levels of oxygen. Decomposition of the plant and animal materials happens much faster with more oxygen. When the carbon in the soil decomposes, it becomes carbon dioxide gas. The mass of the soil decreases, and gas goes into the atmosphere. It's a big chemistry equation.

"It's not easy to picture a soil that disappears," says Rodriguez. "The most challenging process I have to explain - and the most striking - is how carbon in the soil goes from the soil to the atmosphere."

The process of soil subsidence can release significant amounts of greenhouse gasses. This can have connections with climate change.

"To improve soil conservation, I recommend farmers avoid using short flood cycles," says Rodriguez. "I also suggest they use a crop rotation with rice during the summer." These practices decrease the amount of oxygen reaching the soil, which minimizes decomposition.

He also encourages increasing soil carbon by adding plant material back into the soil. Farmers can do this by incorporating residue from sugarcane harvest into the soil. "I am aware that the practices I recommend present challenges from the agronomic point of view, but I am confident they can be sorted." Says Rodriguez.