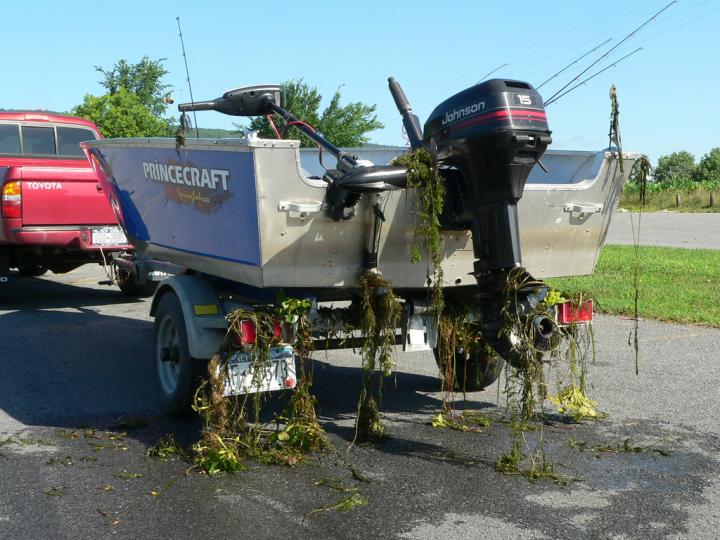 IMAGE: Invasive Eurasian milfoil entangled on a boat and trailer.

A cooler full of fish might not be the only thing anglers bring back from a trip to the lake. Unknowingly, they may also be transporting small aquatic "hitchhikers" that attach themselves to boats, motors -- and even fishing gear -- when moving between bodies of water.

Although preventative measures have been enacted to reduce their introduction and spread, such as mandatory watercraft inspections, educational programs and even dogs trained in sniffing out invasive species, these aquatic stowaways still manage to find their way into new water bodies around the country.

One of the many challenges is identifying how these species spread through human movement. A new University of Washington study uses passive data from a fishing technology company to model the movement of anglers and predict where aquatic invasives may be spreading. The findings were published Sept. 2 in the journal NeoBiota.

"Focusing on anglers allows us to look at a population that uses a wide range of gear on the water; therefore, they have the potential to move a very wide range of species," said Rachel Fricke, a graduate student at the UW School of Aquatic and Fishery Sciences. Fricke's research on invasive species is a continuation of her undergraduate capstone project which she also completed at the school.

The researchers used data provided by ReelSonar, the Seattle-based developer of the pocket-sized fish finder iBobber. The iBobber syncs with an angler's smart device and collects multiple pertinent data points, including fishing location. To date, over five million locations have been recorded from around the world.

"In the past, ecologists have done an incredible job extracting big datasets from the web without necessarily working with the organizations who collected the data in the first place," said co-author Julian Olden, a professor of aquatic and fishery science. "This is to be expected, but I believe that real creativity in the future will come from more authentic collaborations where both ideas and products are co-generated."

Previous studies relied on optional online forms, requiring anglers to log fishing trips from each location they visited. With ReelSonar's passive data, these points are generated automatically, offering researchers an exciting opportunity to further understand where people are moving and when.

The authors specifically looked at location data in the United States and narrowed it down to identify individual trips made by anglers. By quantifying geographic patterns of fishing activities and assessing how these patterns change seasonally, the authors explored angler behavior (fishing frequency and distance traveled) between sites.

"We were predominantly interested in where people were fishing and the amount of time between their trips to different lakes," said Fricke. "The length of time determines the types of species anglers unintentionally move, as each species has very different survival rates out of the water."

The authors were also interested in the routes people were using to travel between fishing locations.

What they found was the vast majority of road distances traveled are over small spatial scales. Most anglers are staying near urban areas, but fishing multiple different lakes or rivers in a small radius over a short amount of time. The authors then focused on "invasion hubs," water bodies that have many linkages via human movement to other nearby water bodies. The timeframe of these movements, which was mostly two days or fewer, fell well within the out-of-water survival threshold for the six invasive species identified in the study.

"Boiled down, people are moving a lot and they're moving quickly from one place to the next, which has the potential to move a number of different invasive species," said Fricke. "I don't think we need to change the preventative measures that we use in light of this data, but it does enable us to better locate those preventative measures in space and time."

Identifying highly trafficked roads near invasion hubs can be valuable from a management perspective and can help influence where roadside inspection stations and educational signage are placed.

"If we see points in these data where invasion hubs exist and where resources are not being allocated, this gives managers the opportunity to identify and implement required boat cleaning and boat inspection stations in those locations," said Fricke. "This kind of data offers a ripe opportunity to reassess where we're enacting preventative measures and to be more strategic about where we do that."