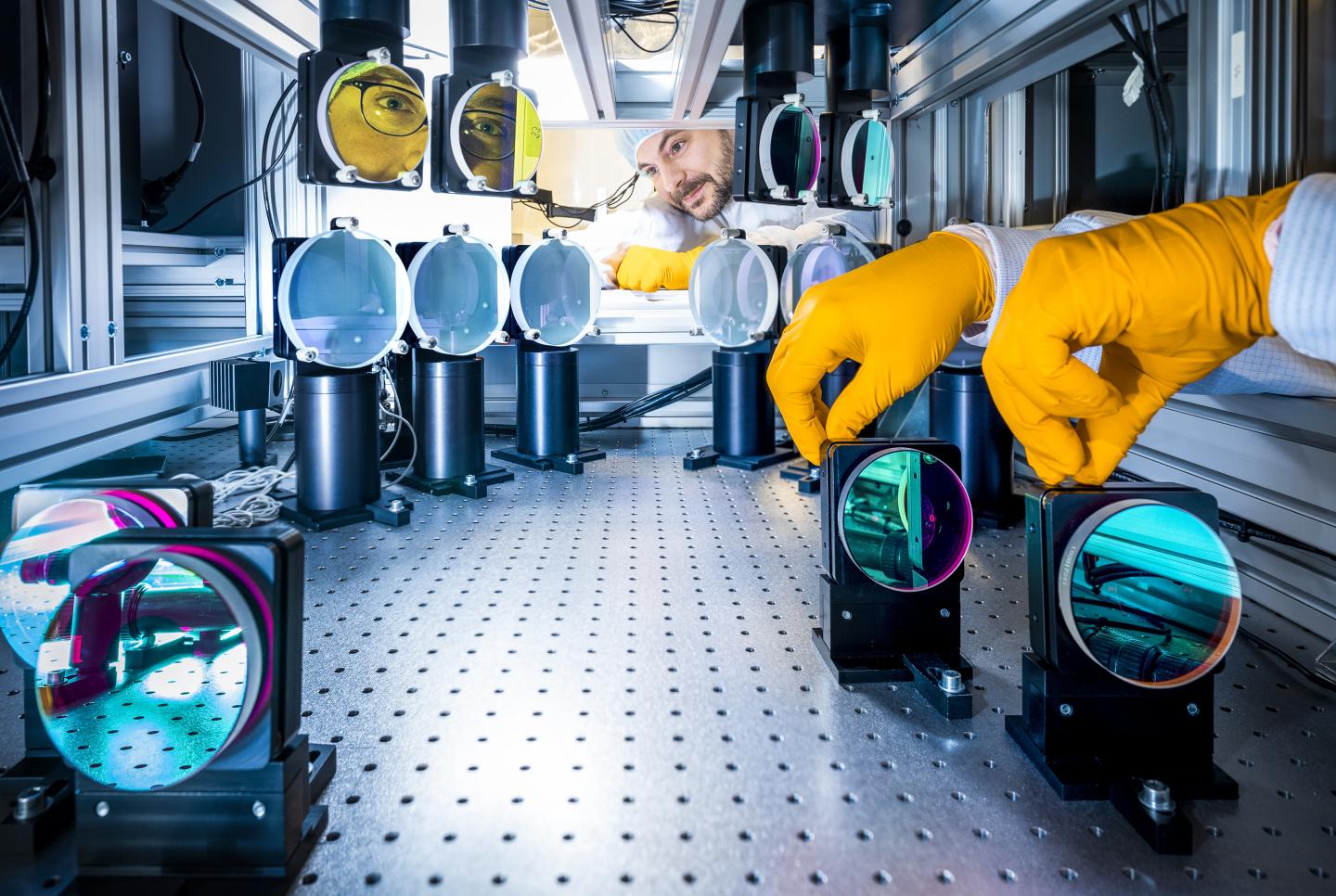 image: At the European XFEL in Schenefeld near Hamburg, researchers from Helmholtz-Zentrum Dresden-Rossendorf are setting up the Helmholtz International Beamline for Extreme Fields (HIBEF). For this purpose, the Dresden scientists are installing two high-power lasers at the HED (High Energy Density) station.

In the depths of space, there are celestial bodies where extreme conditions prevail: Rapidly rotating neutron stars generate super-strong magnetic fields. And black holes, with their enormous gravitational pull, can cause huge, energetic jets of matter to shoot out into space. An international physics team with the participation of the Helmholtz-Zentrum Dresden-Rossendorf (HZDR) has now proposed a new concept that could allow some of these extreme processes to be studied in the laboratory in the future: A special setup of two high-intensity laser beams could create conditions similar to those found near neutron stars. In the discovered process, an antimatter jet is generated and accelerated very efficiently. The experts present their concept in the journal Communications Physics (DOI: 10.1038/s42005-021-00636-x).

The basis of the new concept is a tiny block of plastic, crisscrossed by micrometer-fine channels. It acts as a target for two lasers. These simultaneously fire ultra-strong pulses at the block, one from the right, the other from the left - the block is literally taken by laser pincers. "When the laser pulses penetrate the sample, each of them accelerates a cloud of extremely fast electrons," explains HZDR physicist Toma Toncian. "These two electron clouds then race toward each other with full force, interacting with the laser propagating in the opposite direction." The following collision is so violent that it produces an extremely large number of gamma quanta - light particles with an energy even higher than that of X-rays.

The swarm of gamma quanta is so dense that the light particles inevitably collide with each other. And then something crazy happens: According to Einstein's famous formula E=mc2, light energy can transform into matter. In this case, mainly electron-positron pairs should be created. Positrons are the antiparticles of electrons. What makes this process special is that "very strong magnetic fields accompany it," describes project leader Alexey Arefiev, a physicist at the University of California at San Diego. "These magnetic fields can focus the positrons into a beam and accelerate them strongly." In numbers: Over a distance of just 50 micrometers, the particles should reach an energy of one gigaelectronvolt (GeV) - a size that usually requires a full-grown particle accelerator.

To see whether the unusual idea could work, the team tested it in an elaborate computer simulation. The results are encouraging; in principle, the concept should be feasible. "I was surprised that the positrons that were created in the end were formed into a high-energy and bundled beam in the simulation," Arefiev says happily. What's more, the new method should be much more efficient than previous ideas, in which only a single laser pulse is fired at an individual target: According to the simulation, the "laser double strike" should be able to generate up to 100,000 times more positrons than the single-treatment concept.

"Also, in our case, the lasers would not have to be quite as powerful as in other concepts," Toncian explains. "This would probably make the idea easier to put into practice." However, there are only few places in the world where the method could be implemented. The most suitable would be ELI-NP (Extreme Light Infrastructure Nuclear Physics), a unique laser facility in Romania, largely funded by the European Union. It has two ultra-powerful lasers that can fire simultaneously at a target - the basic requirement for the new method.

Essential preliminary tests, however, could take place in Hamburg beforehand: The European XFEL, the most powerful X-ray laser in the world, is located there. The HZDR plays a major role in this large-scale facility: It leads a user consortium called HIBEF, which has been targeting matter in extreme states for some time. "At HIBEF, colleagues from HZDR, together with the Helmholtz Institute in Jena, are developing a platform that can be used to experimentally test whether the magnetic fields actually form as our simulations predict," explains Toma Toncian. "This should be easy to analyze with the powerful X-ray flashes of the European XFEL."

For astrophysics as well as nuclear physics, the new technique could be exceedingly useful. After all, some extreme processes in space are also likely to produce vast quantities of gamma quanta, which then quickly materialize again into high-energy pairs. "Such processes are likely to take place, among others, in the magnetosphere of pulsars, i.e. of rapidly rotating neutron stars," says Alexey Arefiev. "With our new concept, such phenomena could be simulated in the laboratory, at least to some extent, which would then allow us to understand them better."