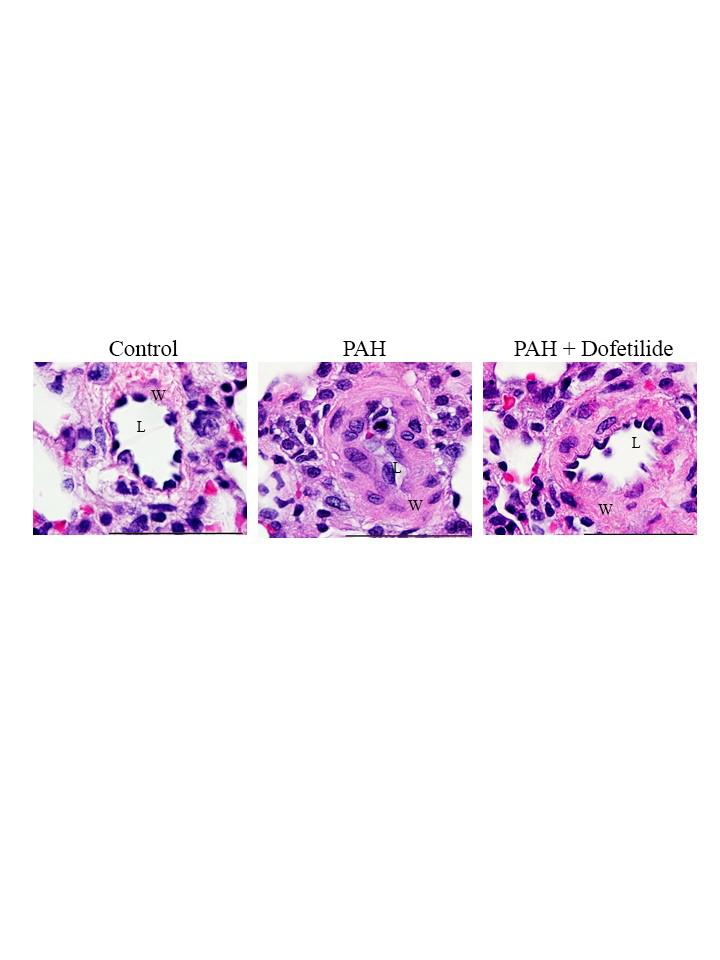 Philadelphia, December 12, 2019 - High blood pressure in the lungs, known as pulmonary arterial hypertension (PAH), is a potentially fatal disease caused by obstruction of blood flow in the lungs. A new study in The American Journal of Pathology, published by Elsevier, sheds light on the pathology underlying PAH and shows that dofetilide, an FDA-approved KV11.1 channel blocker for the treatment of cardiac arrhythmias (brand name: Tikosyn), may be used for treatment of PAH.

Kv11.1 potassium selective channels are recognized for their function in the heart. Despite the importance of Kv11.1 channels for many physiological processes, their expression and function in pulmonary vasculature and potential role in PAH- and chronic obstructive pulmonary disease (COPD)-associated vascular remodeling had not been investigated.

Investigators examined lung tissue from patients with COPD and rats with experimentally-induced PAH. "Our study suggests that Kv11.1 channel blockers may have therapeutic potential for treatment of PAH. Specifically, we have shown that dofetilide, which is already FDA-approved as an antiarrhythmic and therefore has passed all of the drug safety requirements, can be considered for repurposing for treatment of patients with PAH," explained Tinatin I. Brelidze, PhD, assistant professor of pharmacology in the Department of Pharmacology and Physiology at Georgetown University Medical Center, Washington, DC, USA.

Researchers observed that Kv11.1 potassium selective channels are expressed in lungs and blocking these channels with dofetilide inhibits PAH associated with vascular remodeling. In control rats, Kv11.1 channels were expressed in the smooth muscle cell (SMC) layer of large diameter pulmonary arteries (PAs), but not in the SMCs of small diameter PAs (less than 100 μm). In rats with experimentally-induced PAH, the expression of Kv11.1 channels increased and the channels were found in both small and large PAs. The PA walls thickened as they became more muscular, and the lumens shrank.

When rats with PAH were treated with dofetilide, there was no evidence of the typical pathological changes in the vasculature associated with PAH. Dofetilide increased lumen diameter and decreased PA wall thickness to levels seen in the control rats without PAH.

In healthy human lung tissue, Kv11.1 channels were present only in the walls of large-diameter PAs. Lung tissue from patients with COPD showed collapse of alveoli, mild edema of the arterial walls, and fibrosis and thickening of PA walls. Kv11.1 channels were found in the walls of both large and small PAs, similar to that reported in rats with PAH.

Since there is extensive clinical experience with dofetilide for cardiac arrhythmias and it has passed all drug safety requirements, the investigators suggest it merits consideration as a potential treatment for patients with PAH.