If solar cells could generate higher voltages when sunlight falls on them, they'd produce more electrical power more efficiently. For over half a century scientists have known that ferroelectrics, materials whose atomic structure allows them to have an overall electrical polarization, can develop very high photovoltages under illumination. Until now, no one has figured out exactly how this photovoltaic process occurs.

Now a team of researchers at the U.S. Department of Energy's Lawrence Berkeley National Laboratory (Berkeley Lab) and the University of California at Berkeley has resolved the high-voltage mystery for one ferroelectric material and determined that the same principle should be at work in all similar materials. The team's results are published in Physical Review Letters.

"We worked with very thin films of bismuth ferrite, or BFO, grown in the laboratory of our colleague Ramamoorthy Ramesh," says Joel Ager of Berkeley Lab's Materials Sciences Division (MSD), who led the research effort. "These thin films have regions – called domains – where the electrical polarization points in different directions. Ramesh's group is able to make film with exquisite control over this domain structure."

Because BFO has a range of unusual properties, the group led by Ramesh, who is a member of MSD and a professor of materials sciences, engineering, and physics at UC Berkeley, has long studied its characteristics by building custom devices made from the material.

The BFO films studied by Ager and his colleagues have a unique periodic domain pattern extending over distances of hundreds of micrometers (millionths of a meter). The domains form in stripes, each measuring 50 to 300 nanometers (billionths of a meter) across, separated by domain walls a mere two nanometers thick. In each of these stripes the electrical polarization is opposite from that of its neighbors.

Because of the wide extent and highly periodic domain structure of the BFO thin films, the research team avoided the problems faced by groups who had tried to understand photovoltaic effects in other ferroelectrics, whose differences in polarity were thought to surround impurity atoms or to occur in different grains of a polycrystalline material. 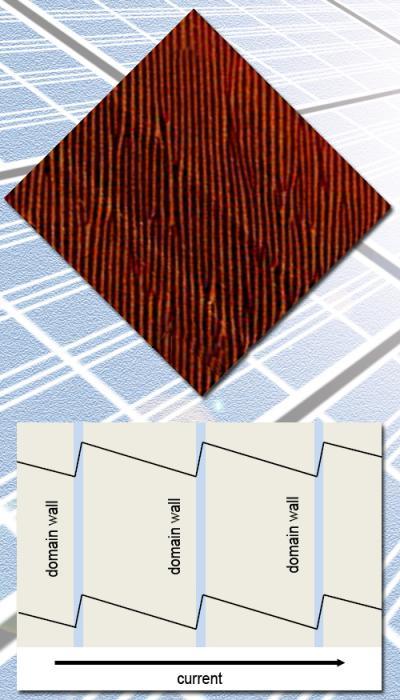 At top, domains with opposite electrical polarization, averaging about 140 nanometers wide and separated by walls 2 nanometers thick, form a well-aligned array in a thin film of bismuth ferrite. When illuminated, electrons collect on one side of the walls and holes on the other, driving the current at right angles to the walls. Voltage increases as excess electrons accumulate stepwise from domain to domain.

By contrast, says Ager, "We knew very precisely the location and the magnitude of the built-in electric fields in BFO." Thus Ager and Jan Seidel of MSD were able to gain "full microscopic understanding" of what went on within each separate domain, and across many domains.

"When we illuminated the BFO thin films, we got very large voltages, many times the band gap voltage of the material itself," says Ager. "The incoming photons free electrons and create corresponding holes, and a current begins to flow perpendicular to the domain walls – even though there's no junction, as there would be in a solar cell with negatively and positively doped semiconductors."

In an open circuit the current flows at right angles to the domain walls, and to measure it the researchers attached platinum electrical contacts to the BFO film. Says Ager, "The farther apart the contacts, the more domain walls the current had to cross, and the higher the voltage."

It was clear that the domain walls between the regions of opposite electrical polarization were playing a key role in the increasing voltage. These experimental observations turned out to be the clue to constructing a detailed charge-transport model of BFO, a job undertaken by Junqiao Wu of MSD and UC Berkeley, and UCB graduate student Deyi Fu.

The model presented a surprising, and surprisingly simple, picture of how each of the oppositely oriented domains creates excess charge and then passes it along to its neighbor. The opposite charges on each side of the domain wall create an electric field that drives the charge carriers apart. On one side of the wall, electrons accumulate and holes are repelled. On the other side of the wall, holes accumulate and electrons are repelled.

While a solar cell loses efficiency if electrons and holes immediately recombine, that can't happen here because of the strong fields at the domain walls created by the oppositely polarized charges of the domains.

"Still, electrons and holes need each other," says Ager, "so they go in search of one another." Holes and electrons move away from the domain walls in opposite directions, toward the center of the domain where the field is weaker. Because there's an excess of electrons over holes, the extra electrons are pumped from one domain to the next – all in the same direction, as determined by the overall current.

"It's like a bucket brigade, with each bucket of electrons passed from domain to domain," Ager says, who describes the stepwise voltage increases as "a sawtooth potential. As the charge contributions from each domain add up, the voltage increases dramatically."

BFO itself is not a good candidate for a solar cell material – for one thing, it responds only to blue and near ultraviolet light, which eliminates most of the solar spectrum. "So we need something that absorbs more light," says Ager.

The efficiency of BFO's response to light – the ratio of charge carriers per incoming photons – is best near the domain walls. While very high voltages can be produced, the other necessary element of a powerful solar cell, high current, is lacking.

Nevertheless, says Ager, "We are sure that this effect will occur in any system with a sawtooth potential, and perhaps in other geometries as well. We are already beginning to investigate new candidates."

Marrying the "bucket brigade" photovoltaic effect in ferroelectrics to the high currents and high efficiencies typical of today's best solar cells could lead to extraordinarily powerful solar cell arrays in the future. 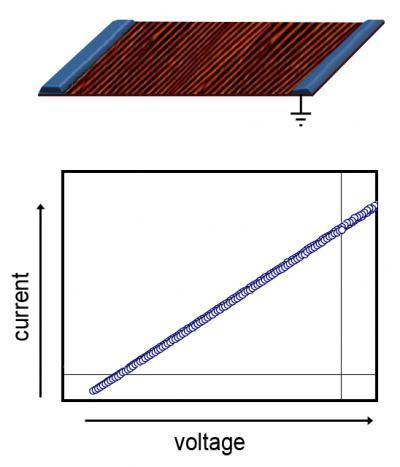 The researchers measured current and voltage with platinum contacts set at right angles to the current. In a typical set-up, the film was 100 nanometers thick, its width from back to front was 1 millimeter, and the distance between contacts was 200 micrometers. Voltage and current increase with the number of domain walls; with contacts 200 micrometers apart, voltage reached 16 volts, several times the 2.7 electron volt band gap of bismuth ferrite.