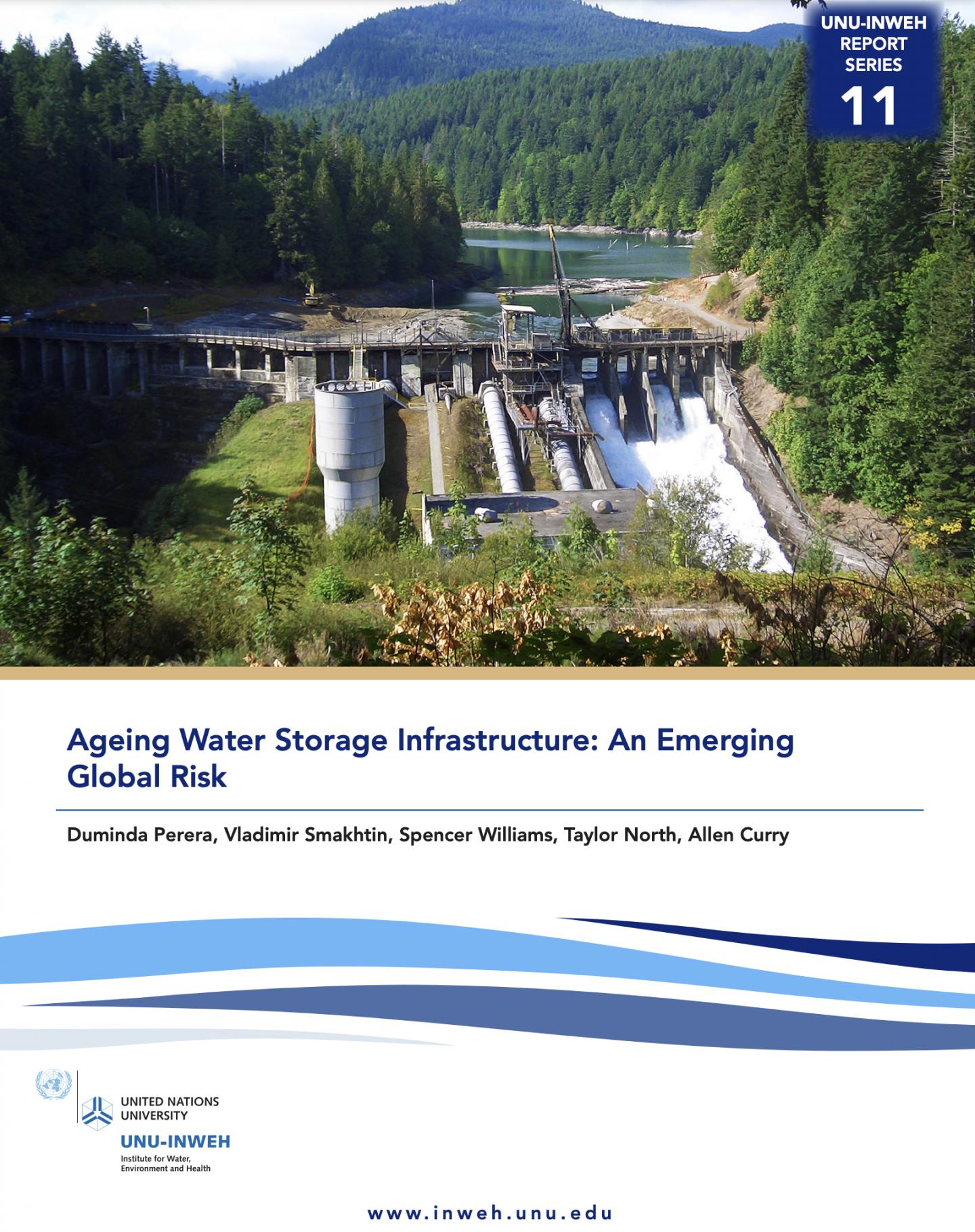 IMAGE: Cover of the UNU-INWEH report, available post-embargo at http://bit.ly/UNU-dams

By 2050, most people on Earth will live downstream of tens of thousands of large dams built in the 20th century, many of them already operating at or beyond their design life, according to a UN University analysis.

The report, "Ageing water infrastructure: An emerging global risk," by UNU's Canadian-based Institute for Water, Environment and Health, says most of the 58,700 large dams worldwide were constructed between 1930 and 1970 with a design life of 50 to 100 years, adding that at 50 years a large concrete dam "would most probably begin to express signs of aging."

The report says dams that are well designed, constructed and maintained can "easily" reach 100 years of service but predicts an increase in "decommissioning" -- a phenomenon gaining pace in the USA and Europe -- as economic and practical limitations prevent ageing dams from being upgraded or if their original use is now obsolete.

Worldwide, the huge volume of water stored behind large dams is estimated at 7,000 to 8,300 cubic kilometres -- enough to cover about 80% of Canada's landmass under a meter of water.

It also details the increasing risk of older dams, the rising maintenance expense, the declining functionality due to sedimentation, the benefits of restoring or redesigning natural environments, and the societal impacts -- pro and con -- that need to be weighed by policymakers deciding what to do. Notably, "the nature of these impacts varies significantly between low- and high-income countries."

"Underlined is the fact that the rising frequency and severity of flooding and other extreme environmental events can overwhelm a dam's design limits and accelerate a dam's ageing process. Decisions about decommissioning, therefore, need to be taken in the context of a changing climate."

"Large dam construction surged in the mid-20th century and peaked in the 1960s - 70s," he says, "especially in Asia, Europe and North America, while in Africa the peak occurred in the 1980s. The number of newly-constructed large dams after that continuously and progressively declined."

According to the report, the world is unlikely to witness another large dam-building revolution as in the mid-20th century, but dams constructed then will inevitably be showing their age.

The pace of large dam construction has dropped dramatically in the last four decades and continues to decline in part because "the best locations for such dams globally have been progressively diminishing as nearly 50% of global river volume is already fragmented or regulated by dams," the report says.

As well, there are strong concerns regarding the environmental and social impacts of dams, and large dams in particular, as well as emerging ideas and practices on the alternative types of water storage, nature-based solutions, and types of energy production beyond hydropower.

However, most dams removed to date have been small; decommissioning large dams (defined by ICOLD as 15 or more metres from lowest foundation to crest, or 5 to 15 metres impounding more than 3 million cubic metres) is "still in its infancy, with only a few known cases in the last decade."

"A few case studies of ageing and decommissioned large dams illustrate the complexity and length of the process that is often necessary to orchestrate the dam removal safely," adds co-author and UNU-INWEH Adjunct Professor R. Allen Curry, based at the University of New Brunswick.

"Even removing a small dam requires years (often decades) of continuous expert and public involvement, and lengthy regulatory reviews. With the mass ageing of dams well underway, it is important to develop a framework of protocols that will guide and accelerate the dam removal process."

Decommissioning will also have various positive and negative economic, social, and ecological impacts to be considered in a local and regional social, economic, and geographic context "critical to protect the broader, sustainable development objectives for a region," the report says.

"Overall, dam decommissioning should be seen as equally important as dam building in the overall planning process on water storage infrastructure developments."

"Ultimately, value judgments will determine the fate of many of these large water storage structures. It is not an easy process, and thus distilling lessons from and sharing dam decommissioning experiences should be a common global goal. Lack of such knowledge and lack of its reflection in relevant regional/national policies/practices may progressively and adversely affect the ability to manage water storage infrastructure properly as it is ageing."