A study reveals the keys to the locomotion of snails

The main aim of this study, carried out in collaboration with the University of California at San Diego (UCSD) and Stanford University (both in the US) is to characterize some aspects of gastropod (snails and slugs) locomotion to basically respond to one question: To what extent do they depend on the physical properties of their mucus to propel themselves forward? This question is fundamental when applying the studied mechanism to the construction of biomimetic robots. "The aim is for the robot to be able to propel itself in any fluid mucus without having to carry its own reserve of mucus along," explained one of the authors of the research study, Javier Rodríguez, Professor at the UC3M Department of Thermal and Fluids Engineering. "Bear in mind," he stated, "that snail mucus has a very particular behaviour because it is a specific type of fluid with complex physical characteristics called non-Newtonian fluid."

Until now, it was known that snails and slugs move by propagating their body in a series of muscular wave motions to advance from their tail to their head, but the importance of their mucus in this process was not known. The conclusion obtained by these scientists is that this fluid's properties are not essential for propulsion. "Without a doubt, it could have other uses, such as climbing walls, moving upside down, or preserving moisture in the body when on a dry surface, but if we want to construct a robot that emulates a snail, the latter could move over fluid mucus with ordinary properties" pointed out Professor Rodríguez, who has recently published an article on this matter, together with his colleagues from the North American universities, in the scientific review, Journal of Experimental Biology. 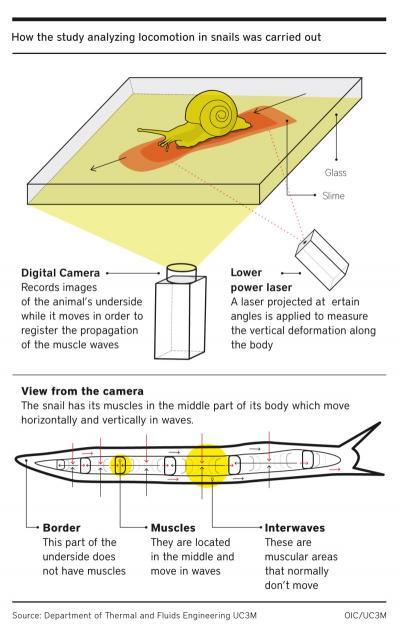 This is an infographic about snail locomotion, explaining the system used in the study.

To carry out this study, the researchers have characterized the propagation of these muscular waves which occur along the body of gastropods. For this purpose, they place the snails and slugs so that they move on transparent surfaces, illuminating their undersides in different ways so as to record images through digital cameras, subsequently analyzing this data by computer. "The ways to illuminate the body vary depending on what is being measured," stated María Vázquez, research fellow from the UC3M Fluid Mechanics Group where she has collaborated in experiments carried out in Spain and in the US. "For example", she explained further, "to measure the speed of the wave, we placed a light on the underneath part of the snail, while to measure the vertical deformation of the body we used a low power flat laser (so as not to harm the animal) projected at a given angle." Together, all of these measures have allowed the 3D reconstruction of the snail's underside during propulsion.

The most surprising thing about snail movement is summed up very well in a phrase from a biology professor from Stanford University, Mark W. Denny, written in the 1980's: "How can an animal with just one leg walk on glue?" And the mucus is highly adhesive, which offers some advantages such as walking on walls and moving on the ceiling. Furthermore, as anyone who has ever held a snail in their hand can testify, when snails move, they do not use force over specific points, as animals with legs do, but rather they distribute a relatively low force over a relatively large area. "What also happens," Professor Rodríguez pointed out, "is that it is difficult to move over glue without exerting quite a bit of force while dragging fluid along." Snails, after millions of years of evolution, have succeeded in being able to move on a highly adhesive surface, avoiding these inconveniences "which is without a doubt of interest and worthy of study", he added

This type of research can help in the design of biomimetic robots that carry out functions which conventional devices cannot do. Some Japanese researchers, for example, propose using the snail propulsion mechanism to move an endoscope though a human body (the trachea, intestines, etc), taking advantage of the mucus film that usually covers these ducts. "This mechanism," Javier Rodríguez remarked, "generates a smooth distribution of force instead of supporting itself in concrete points, which would reduce the irritation caused by the movement of an endoscope, in this case."

At the moment, the results published by the UC3M, UCSD and Stanford scientists only deal with the experimental part of study carried out, although they are working on a second article that includes a simple theoretical model which explains these animals' movement. The preliminary results were presented last November at the Annual Conference of The American Physical Society. In addition, these researchers are interested in extending their analysis to situations in which the animal moves up slopes of varying angles. 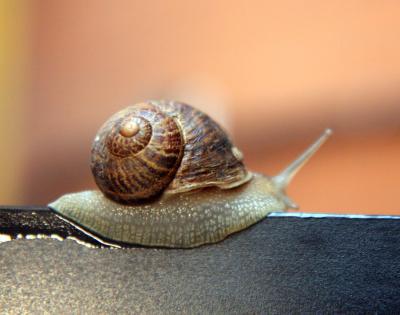 This snail image was taken at the UC3M Department of Thermal and Fluids Engineering laboratories.