Astronomers at the Naval Research Laboratory (NRL) have produced the first images of the sky from a prototype of the Long Wavelength Array (LWA), a revolutionary new radio telescope to be constructed in southwestern New Mexico. The images show emissions from the center of our Galaxy, a supermassive black hole, and the remnant of a star that exploded in a supernova over 300 years ago. Not only a milestone in the development of the LWA, the images are also a first glimpse through a new window on the cosmos. "First light" is an astronomical term for the first image produced with a telescope. It is a key milestone for any telescope because it indicates that all of the individual components are working in unison as planned.

Once completed, the LWA will provide an entirely novel view of the sky, in the radio frequency range of 20–80 MHz, currently one of the most poorly explored regions of the electromagnetic spectrum in astronomy. The LWA will be able to make sensitive high-resolution images, and scan the sky rapidly for new and transient sources of radio waves, which might represent the explosion of distant, massive stars, the emissions from planets outside of our own solar system or even previously unknown objects or phenomena. 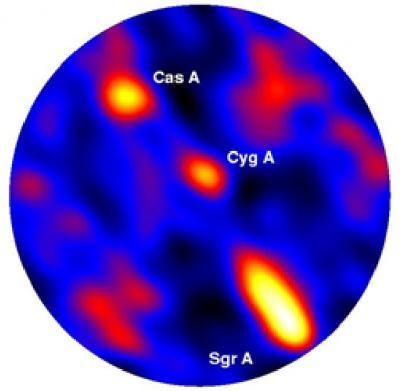 Commissioning observations made this past fall by the LWDA show its all sky imaging capability. In this frame from the LWDA first light movie, emission from the bright sources Sagittarius A at the center of our galaxy, Cassiopeia A, and the black-hole powered radio galaxy, Cygnus A, are all clearly visible. Cassiopeia A, the strongest discrete radio source visible in the sky, is a remnant of a massive star that exploded in a supernova over 300 years ago. Credit: Tracy Clarke, Interferometrics Inc.

"The LWA will allow us to make the sharpest images ever possible using very long wavelength radio waves. This newly opened window on the universe will help us understand the acceleration of relativistic particles in a variety of extreme astrophysical environments including from the most distant supermassive black holes. But perhaps most exciting is the promise of new source classes waiting to be discovered," says Dr. Namir Kassim, an NRL astronomer in the Remote Sensing Division and LWA Project Scientist. Dr. Tracy Clarke, of Interferometrics, Inc. in Herndon, Virginia, another astronomer on the NRL team adds, "By detecting distant clusters of galaxies the LWA may also provide new insights on the cosmological evolution of the mysterious dark matter and dark energy."

Although radio astronomy was discovered at low frequencies (near 20 MHz, corresponding to wavelengths of 15 meters), well below the current FM band, astronomers quickly moved up to higher frequencies (centimeter wavelengths) in search of higher resolution and to escape the corrupting effects of the Earth's ionosphere, a region of charged particles between about 50 and 600 miles above the surface. The ionosphere, which can "bend" radio waves to produce long-distance reception of AM and short-wave radio signals, also causes distortions in radio telescope images in much the same way that atmospheric irregularities cause twinkling of stars. Ionospheric effects become much worse at low frequencies, but new imaging techniques developed at NRL and elsewhere have allowed the "ionospheric barrier" to be broken and enabled high-resolution astronomical imaging at these low frequencies for the first time.

These new imaging techniques provide an improved view of not only the astronomical sky, but the Earth's ionosphere as well. The full LWA will generate richly detailed measurements of the ionosphere that will complement other ionospheric data sources. Understanding the ionosphere is critically important to the Department of Defense because of its effects on communications and navigation systems.

The current prototype, referred to as the Long Wavelength Demonstrator Array (LWDA) to differentiate it from the larger LWA project, completed installation on the Plains of San Agustin in southwestern New Mexico in the fall of 2006. Funded by NRL and built by the Applied Research Laboratories of the University of Texas, Austin (ARL:UT), the telescope consists of 16 antennas connected to a suite of electronics that combine the signals from each antenna. Each antenna is only 4 feet tall and acts much like an old style television antenna, receiving radio waves from many different directions simultaneously. When combined, the data from the individual antennas is comparable to that from a more traditional dish style telescope with a diameter of 70 feet.

The antenna design, which resembles a household ceiling fan, with blades that have drooped down at an angle of 45 degrees, was conceived to allow the array to see the full sky and cover a wide range of frequencies with a single antenna "The sophisticated digital electronics used in the LWDA allow it to change observing frequency or point in a new direction in an instant, and even allow it to look in two directions at the same time," says Dr. Paul Ray, an astrophysicist at NRL who is overseeing the overall performance of the LWDA.

When completed, the LWA will operate in a similar manner, but on a much grander scale. Plans call for over 13,000 individual antennas, divided into 50 stations. These stations will be spread over a 250-mile area across New Mexico, and possibly beyond. Dr. Ray explains, "With so many antennas required for the final LWA, it is vital that we have a testbed on which we can demonstrate the performance of a small number of them before construction of the full LWA begins in earnest." NRL's LWDA serves this purpose, allowing the astronomers and engineers to test the dipole antennas and related computer hardware and software on a small scale, before embarking on construction.

Written from a news release by Naval Research Laboratory.