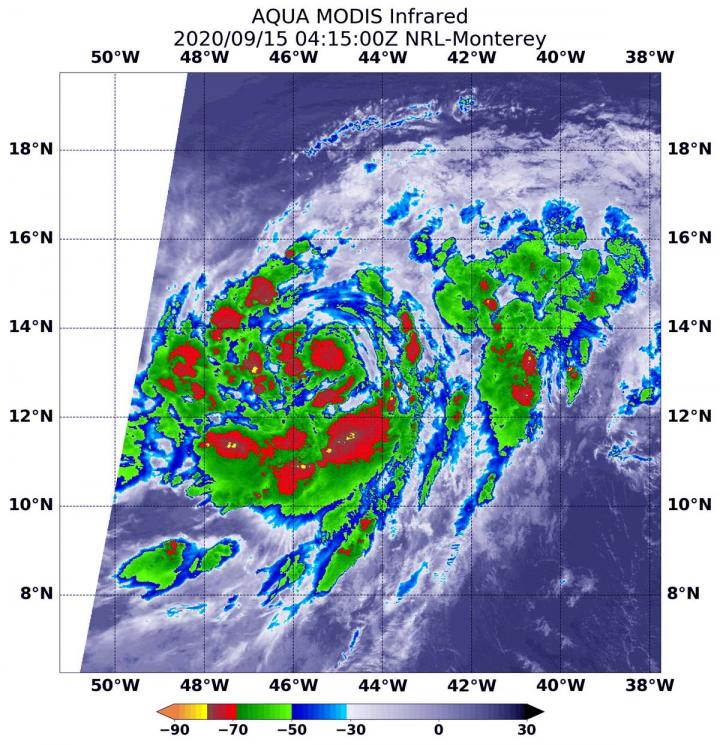 When a tropical cyclone consolidates, it means that it is getting more organized and its circulation is improving. An improved circulation helps make for a stronger storm. Infrared imagery from NASA's Aqua satellite showed that Teddy was consolidating in the Central North Atlantic Ocean.

MODIS found some cloud top temperatures were as cold as or colder than minus 70 degrees Fahrenheit (minus 56.6 Celsius). Cloud top temperatures that cold indicate strong storms with the potential to generate heavy rainfall. The infrared data showed that Teddy's structure is slowly improving. The infrared imagery and visible imagery revealed that the building of thunderstorms around the storm's core has increased, despite the continued presence of dry slots.

Maximum sustained winds have increased to near 65 mph (100 kph) with higher gusts. Additional strengthening is forecast for the next several days. Teddy will likely become a hurricane later today or tonight and could reach major hurricane strength in a few days. The estimated minimum central pressure is 999 millibars.

"Teddy's low [wind] shear and warm sea surface temperature environment should be conducive for further strengthening, and the NHC intensity forecast is largely unchanged," noted David Zelinsky, Hurricane Model Diagnostician and Meteorologist at the NHC. "Some dry air in the environment could restrict Teddy's intensification rate, but is not expected to prevent Teddy from becoming a hurricane later today or tonight. Continued strengthening is expected thereafter and Teddy is forecast to become a major hurricane within the next few days."